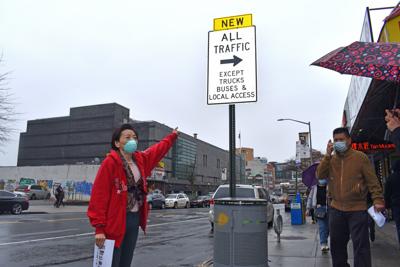 Those are just some of the words Ellen Young used to describe the Flushing busway.

“The concept itself was not a bad idea, but it has been designed by politicians in Manhattan with no real understanding of what it means to live here and what the people of Flushing actually need,” the District 20 City Council candidate said April 12.

Just a few days earlier, the city Department of Transportation began issuing bus lane camera violations to vehicles using the 0.6-mile portion of northbound Main Street from Sanford Avenue to Northern Boulevard, as well as northbound Kissena Boulevard from Sanford to Main. Only buses, trucks and emergency vehicles are permitted as through-traffic — all other vehicles are required to take the next available right turn, except at 41st Avenue, where left turns are permitted.

Those who ignore the rules can be fined $50 on the first offense. The rate will continue to rise as one continues to ignore the regulations to as much as $250.

Young, who lives in a Kissena Boulevard complex, said she and her neighbors are suffering from the busway. Drivers diverted from Main Street are forced to circle around the surrounding blocks, which has greatly increased traffic congestion and pollution in the area, she said.

Young called the busway a “punitive tax” on those who live in the neighborhood — they are penalized for driving down the street on which they live. Furthermore, she said the signs along the roadways are poorly marked. Young pointed to a warning sign on the corner of Kissena Boulevard and Barclay Avenue, which directs traffic but doesn’t warn about violations.

“This is simply a quality-of-life issue that has made the lives of Flushing residents dramatically harder,” she said.

In her City Council bid, Young promises to reduce the 24/7 busway hours of operation to just six hours a day during peak transit times: from 7 to 10 a.m. and 4 to 7 p.m. Young’s plan would suspend the busway during weekends and holidays, as well.

Community members have decried the busway since plans were announced last June. Most of the opposition comes from small business owners, who believe the limited private car roadways will deter outside customers from traveling into the neighborhood.

Don't just blame city officials, blame the odious influence and infiltration of  the "Department of Transformation" by Transportation Alternatives and the relentlessly intolerant anti-car propaganda of their allies at Streetsblog NYC.

The anti-car folks are only anti-car for laypersons like you and me. James Oddo gets to chat about Mets baseball with Gersh Kuntzman on Twitter and doesn't receive much, if any, unfavorable coverage by streetsblog despite the fact that he drives a Jeep. Clearly they tolerate some people driving cars, but not everyone.

Don't worry. DOT will conduct a survey with the streetsblog and transportation alternatives people and it will show 100% support of the busway. The city will then say there is a mandate to not only keep it, but expand it further.

Cry me a river ! You built this mess now deal with it.

Moe said...
Ronald Reagan once said “The nine most terrifying words in the English language are, ‘I’m from the government and I’m here to help.” !

The prison that is NYC.

Who approved the Overdevelopment ?
Anti-development is never looked at in a clear way.

Main Street was never a problem until they started jamming people into it to make it look like a third-world slum.

This is simply imposing on it a sense of civic planning.

If they like a chaotic jumble of people they should go to countries where that is the norm.

There is no reason that NYC should resemble the lower east side of Teddy Roosevelt's era. That is in our past, not our future.

Once more proving that City Hall only sees Queens and it's residents as tax cattle, to be milked of every penny, and then slaughtered.

DeBlasio might not be the sociopath that Cuomo is, but he shows no sympathy or remorse for all the people he's put out of business to make a handful of rich cyclists happy.

"Rich cyclists" ?
Come on man lay off the bikes Fat !

What’s the diff? Flushing’s a shit hole!
Jam packed like an overpopulated city in China.
How many sardines can the developers stuff in a can?