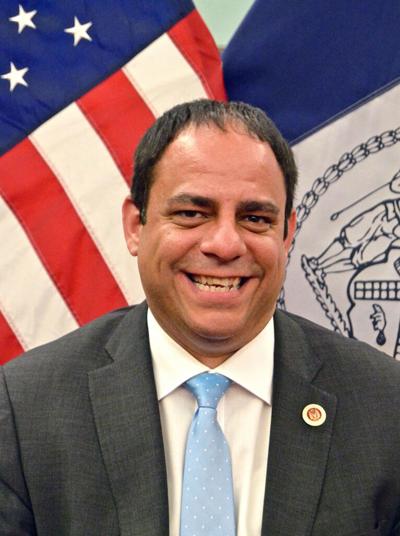 With his term officially ending this year and six people already vying to replace him, City Councilman Costa Constantinides (D-Astoria) announced Wednesday morning that he will step down effective April 9, citing family considerations.

He has accepted the position of chief executive officer of the Variety Boys and Girls Club, which is located in Long Island City.

“It’s not a decision I made quickly or lightly,” Constantinides told the Chronicle in a telephone interview on Wednesday. He said the Covid-19 outbreak has struck his family hard in the last year, and that his wife is in poor health.

As to the timing and when he knew it was right, Constantinides said he has received a number of offers.

“This lined up with what I wanted to do,” he said, adding that his mother years ago worked at the club for about a year.

Constantinides was elected in 2013. Under the City Charter, as the vacancy will take place less than 90 days before the June 22 primary, the seat will remain vacant until after the general election in November, at which time his successor will be sworn in immediately rather than waiting until Jan. 1. The district covers Astoria and Rikers Island and parts of Jackson Heights, Woodside and East Elmhurst.

The councilman admitted there will be unfinished business upon his departure.

Good riddance jackass, don't let the door hit you on the way out. The people of Astoria should be celebrating getting rid of this fucking idiot.

Oh no, there is weeping and gnashing of teeth that the dear servant of the people must step down - but not to worry, he is in his people's thoughts and payers. Go on some of the local blogs but take a strong drink before you start reading.

Why quit at a point where you leave your district unrepresented for many months? Why avoid the special election? What a giant turd.

Take Van Bramer with you

Costa will be missed!

Good thing Cuomo and debozio don't leave early. We still need all the good things not implemented yet from their woke agenda.

Why quit at a point where you leave your district unrepresented for many months? Why avoid the special election? What a giant turd.

Never represented his district - he was the runner for the Dons of Astoria.

We will be forever remembered for the great project he left his community:

Now they made a new job for him at the Boys Club. Wonder who or how his salary is being supported THERE!

He and his wife indeed were fairly walloped by the CCP virus. I believe it took a heavy physical toll on them. Costa, you can thank Xi Jinping and his toady Politburo. Spread this word to your constituents, ok? Et urbi et orbi.

Tha Boys are afraid another commie will get in so they did not have an election until they can build support for another nonentity whose only credentials is a residence in Vallonia.

So you are not represented?

The important people are always connected so for the little people? who cares, until it's time for them to follow the script and stand on the assigned X on the floor to place an X next to another faceless X from the Club.

Can't wait until the entire country is run like that.

Speaking of do nothing NY Pols :
AOC's legislation received no action in committees, no floor votes, and none ever became law.

Costa! Get your front teeth fixed!!! How many times we gotta tell you this? You look like something from the movie Deliverance.

>Speaking of do nothing NY Pols :
>AOC's legislation received no action in committees, no floor votes, and none ever became law.

When you put it that way, it sounds more like her co-workers are the do-nothings.

No loss. Met him when he was trying to get signatures to get on the ballot for QC prez. No real answer for solving the transit deserts except to say he would get the MTA to sway. As a peon who works for the agency, I can safely say he has no clue how the machine works.