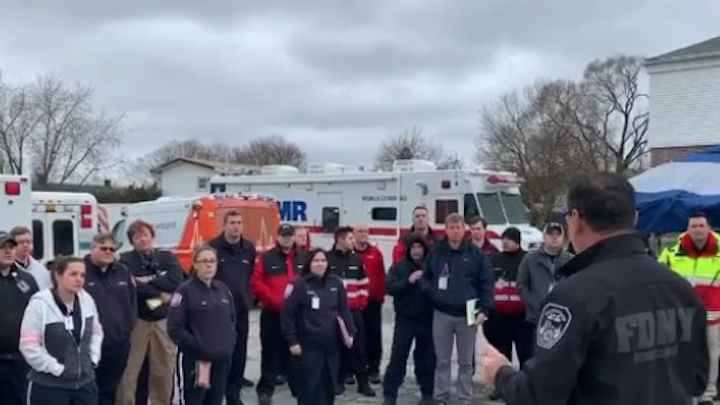 Mayor Bill de Blasio said now is not the time to give EMT workers a raise — just days after emergency medical calls surpassed records set on 9/11 in response to the city’s coronavirus pandemic.

“We want to take care of these workers and support them, of course have their backs, but this is a bigger issue in the labor dynamics of this city,” de Blasio said on WNYC radio Friday.

“It’s not the time to, you know, make something up on the fly in the middle of a crisis. That’s just the truth. We’ll figure this out when we get through this crisis,” de Blasio said.

The mayor made the remarks in response to a woman named Willa from Manhattan who called the radio show to ask de Blasio if he’d changed his position on not raising the pay of FDNY EMTs to match the salaries of their firefighter colleagues.

“This is what these men and women signed up for, this pandemic. And they will meet this moment,” Willa told the mayor.

“They’re risking real sickness and death in doing so but they need to know that you have their back. Do you still value the work that FDNY EMS does less than other first responders in terms of real dollars and cents?” she asked.

About 23 percent of all EMS members were out on medical leave because of the virus or other ailments as of Sunday. Last week medical calls were up to around 6,500 per day — hundreds more than the city’s busiest day of the year.

A January 2019 Post investigation found that the city’s emergency worker shortage was due in part to the pay gap among first responders. Firefighters are paid $86,000 after five years compared to $48,000 for a top EMT.

“It is unfortunate that at a time when FDNY EMS employees need our mayor’s leadership and support, he chooses to stomp on them,” Barzilay said, noting that President Donald Trump recently called for incentive pay for emergency workers.

There the mayor goes again with his dithering just like when the contagion was spreading, "Now is not the time, yadda yadda yadda". But there was a lot of time to find $850,000,000 for his fucking wife's Thrive program and agency.

Sad that NY Needs any money it has to buy the loyalty of brain dead voters living off the theft of the working class rather than fairly pay people who do dangerous work.
If Di Blasio could run again for a third term he would win again sadly.

Yes he would win because in NYC you are taught 3rd world politics not civics - the greatest value to the system is loyalty to your local caudillo not civic engagement as a informed citizen. The funny thing is how they all go nuts when they see Trump. He is a piker compared to them.

Funny how the Democratic Party ignored the nation for 3 years as they chased after Trump, held debates that catered to demographics rather than substance, and ended up with an addled old man sitting in a basement mumbling sentences that no one listens too. Far far way from Roosevelt and Kennedy. For that matter, even from Tweed.

Where was that picture taken? Alaska? There all white ? Where is the Diversity Police...