Bank lobby is home to homeless 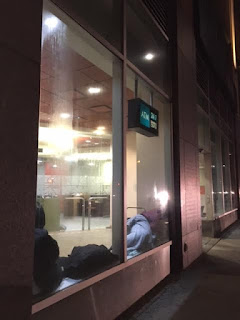 "The homeless are now banking at Carver Saving Bank to shelter them from the coldness. This is yet another health hazard in the black neighbourhood. Blacks face all sorts of suffering at the hands of black political bandits, aka political leaders.

They ignore every form of suffering perpetrated against black people. Now homeless occupants are using the ATM area as their quarters at nights; when the bank is closed. After, hearing much complaints, I tried using the ATM myself last week. The bank is located at 159-02 Archer Avenue, Jamaica Queens, near the e-train station.

The experience was stink and scary; two homeless persons were present. One was wrapped in a blanket; with his or her back turned away from the ATM. The other was sitting up straight with his head covered. His eyes were darting, then staring directly at me. The atmosphere was shitty." 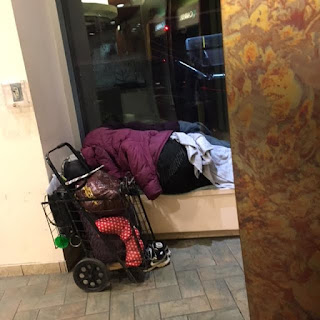 "The quality-of-life abuse seems to be non-stop. Hopefully, these political bandits would come to a tragic end; by means of prison or what ever else; they are useless. Yes, Blacks live in hell. Keep wondering why Trump is our president?

Depression and unemployment in the black neighbourhood are at an all time high. Yet, Borough President, Katz claims that she is building on her success. Sadly, blacks cannot count on black leaders; who have recluse them self from the plight. Worst yet, the Blacks keep voting for the public bandits.

I called Carver today at (718)230-2900. After a few transfers; I spoke to Mr. Williams/ manager. He said that he will contact the appropriate person to resolve the problem. I asked him to please remove the homeless encampment. It is unsafe and unhealthy."

Happens every winter. Nothing is ever done.

Jamaica: The hottest neighborhood in NYC? Who said that?

I recall reading that Jamaica is revitalized and thriving!

Must have been reelection time or just more fake news...

Bring in Jamaica born and bred President Donald John Trump to clean up this Jamaica swamp and morass. He attended church in downtown Jamaica as a young lad and his mother took him shopping on Jamaica Avenue. His roots are deep. Folks, Jamaica courses through his blood.

A DJT-led Commission to Make Jamaica Great Again. Opening session to be held at York College.

This scenario (and others like it) Pamela described MUST END.

We had a black president for 8 years, did it help? The problem lies on individual. When you don't study and work hard to improve yourself, don't blame others. Such vicious cycle will never end.

I just don't go in bank lobby ATM's with no security guard present. Guess that was Obama's change. These two people are definitely eligible for welfare and other homeless benefits. Who I blame are the slobs pulling a paycheck at HRA and DHS Dept of Homeless Services. How come they're not put up in hotels? The elected officials office do not about homeless people.

Here's two alumni of the Head Start Program and School Busing. See how that worked out. Guess this was the change Obama talked about.

Meanwhile today NYC communist mayor is protesting against Trump, lots of Jewish folks there also, for some reason they love Muslims after 9/11.
DeBozo is an utter, complete failure, maybe he is worried that his voters will be deported and he will lose the next election. One can hope.

This is what we are missing people!
Enjoy.
https://www.youtube.com/watch?v=Ulsl0m0sQ3I

Same scenario at Santander in Astoria LIC, Crescent St & 34 Ave, by nycha Ravenswood & Queensview co-op. Either inside or outside, waiting. (Bank was Independence then Sovereign.)

So all those homeless hotel shelters De Faustio and DHS dumped in Jamaica the past few years and the areas surrounding it are not adequate enough for some of the indigent.

Been going on since ATMs came into existence. Kicking these sad people out is not the answer. Does anyone really choose to live this way?

They need medical and psychological treatment. So many appear very sick.

Anonymous said...Kicking these sad people out is not the answer

OK maybe we should put them in the vestibule of your building, or better yet, any room in your apartment/house?

Most homeless people are mentally ill and they come from families that don't or won't provide assistance.

Trump was raised in Jamaica Estates, one of the riches areas of Queens at the time. He did not rub elbows with the poor.

Anon stated: Does anyone really choose to live this way?

YES partially, they do by poor life choices, not being responsible for their actions, blaming everyone else for their problems, dropping out of school........do I need to go on more. Let's face it, these folks did not stop off in a cardboard box, shit stained underwear or a bank lobby nor did they just wake up and this all of a sudden happened.

ONLY MEDIA SCRUTINY CAN TURN THE TIDE AND HELP PUT AN END TO THIS PROBLEM. THE MOTEL IN BELLEROSE QUEENS THAT WAS USED AS HOMELESS SHELTER WAS FORCED TO ADDRESS THIS PROBLEM BECAUSE OF THE MANY RESIDENTS PROTESTING AND THE NEWS OUTLETS KEEPING ONTOP OF THE STORY. IF I WERE, I'D CONTACT NY1 & WPIX. THEY GET THE JOB DONE.

Free housing to the entire world for those who can get here, right? As long as that advertisement is out there, they will come.

Actually, they do need mental treatment, and support. We had things called mental hospitals back in the day where people like these would live and get some kind of help. Mario Cuomo closed them all and put this people out on the streets, with a note to take your pills.

"He [Trump] did not rub elbows with the poor [in Jamaica, Queens]."

At times you will see homeless sleeping in the HSBC bank in Elmhurst on 55 Avenue and Queens Blvd. They are the ones who sleep around Queens Place.
With shelters in the area I guess these individuals prefer to be outside.
Unfortunately I only visit the ATM's when the bank is open.

How is that related?

>> georgetheatheist said...
>>Really? Check out Trump's 1959 Confirmation photo from the 1st Presbyterian Church in Downtown Jamaica - even 2 black kids in the class

How do you know?


Why did you offer black people as an example in the context of responding to a remark that Trump didn't rub elbows with poor people?


>> georgetheatheist said...
>>Really? Check out Trump's 1959 Confirmation photo from the 1st Presbyterian Church in Downtown Jamaica - even 2 black kids in the class

At least these folks aren't like the guys who hang out in ATMs to jump up to hold the door when you walk in and ask you for money. It's pretty darn intimidating. Like you need to pay another fee to access your money.

If the First Presbyterian Church is centrally located in Downtown Jamaica, it stands to reason that Trump came across rich, middle class, and poor just getting into the building, walking the sidewalk. (Unless he was carried in via an enclosed sedan chair). Just how did the young lad, the early church-goer Donald, visit the downtown church from up on the mountain of Jamaica Estates on Sunday mornings: limo, public transit, roller skates, or hoofing-it?

Well indeed there were - income indeterminate - 2 black kids (at least) in the future President's Sunday school class. A SOCIOLOGICAL observation which I did not want any perhaps boob reader to overlook.


You assumed the black people in the picture were poor. Just admit it for atheistic Christ's sake.

>> georgetheatheist said...
- income indeterminate - 2 black kids (at least) in the future President's Sunday school class. A SOCIOLOGICAL observation which I did not want any perhaps boob reader to overlook.

Nope, wont do that because I know better. Because I know that blacks in Queens make more money than whites. Check out Professor Hacker's study from 2006:

You lose butting heads with GtheA. Now go to the corner of the class and put on a dunce cap.

PS I'm finished with this thread. You may have the last word.

To Anonymous Number 16 who correctly said: ❝Actually, they do need mental treatment, and support. We had things called mental hospitals back in the day where people like these would live and get some kind of help. Mario Cuomo closed them all and put this people out on the streets, with a note to take your pills.❞

Mario & Son are dynastic, political hustlers of epic, humanitarian fail, masquerading about as great leaders when it was painfully obvious how they were always 300% false, fake and failed—— exactly like everyone else who continues to betray public service with impunity in this extreme wealth-divided city and state of zero leadership that is only getting worse by the hour!

And, the public be damned (again and still)!