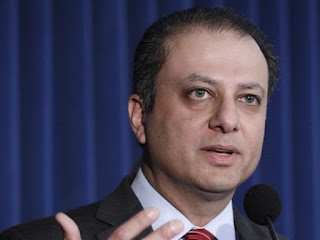 In the wake of the presidential election last fall, lawyers for Mr. de Blasio expressed concerns to federal prosecutors about the lengthy nature of their probe and its potential proximity to the mayoral election cycle, requesting that, if possible, prosecutors bring any charges in coming weeks, so the investigation wouldn’t linger into the year of his re-election bid, according to people familiar with the matter.

As part of that effort, Mr. de Blasio’s lawyers urged prosecutors to question the mayor and any relevant aides as soon as possible, these people said.

The probe, of course, has stretched well into Mr. de Blasio’s re-election year, and threatens to extend into campaign season. While public-corruption prosecutors often are mindful that their work may be seen as politicized, many are particularly sensitive to how their decisions might be viewed after Federal Bureau of Investigation Director James Comey endured criticism last year for taking public actions concerning the FBI’s investigation of Democratic presidential nominee Hillary Clinton days before the November election, people familiar with the office said.

The Manhattan U.S. attorney’s office takes into consideration the electoral context of any investigations and possible charges, said Daniel Stein, who was the office’s chief of the criminal division until November 2016, speaking generally about the office’s practices.

“Prosecutors would not bring a case, or close an investigation, before it makes sense to do so,” Mr. Stein said. “But where they can, prosecutors will try to do their work in a way that does not allow an investigation to cloud a candidate or unfairly affect a campaign.”

Around City Hall, some have suggested that if federal prosecutors decide against charging the mayor or any of his aides or allies, they should say so publicly. Such pronouncements, however, are rare.
Posted by Queens Crapper at 9:21 AM

I don't have time for this.

Fuck you Mayor Big Slow de Faustio. Fuck. You. You did it to yourself.

You should worry about getting indicted than getting re-elected, you wretched big headed swine.

Dear Preet: Take as much time as you need to build a strong case, because you, deBlas and everyone else knows this prick is dirty. Good luck in your future endeavors.

Mister Mayor, do not worry, the FBI investigations of your friend, Madame HiLlEry Diane Rodham Clinton, had minimal affect on the polling.

Fortunately the dishonest media's polling only hurt the democrats.

Perhaps there will be another surprise outcome...

Why should anyone under investigation be allowed to dictate how it is conducted? to hell with this guy. he's a waste of space and Preet needs to put the nail in the coffin already. it's bad enough that his question was allowed to be negotiated to only a four hour time limit. from now on i think all criminals should be allowed to inform prosecutors they will only answer questions for x amount of time.

Deblasio you already hurt your reelection bid.
Just waiting to see who runs against you.
A change is needed.

>Just waiting to see who runs against you.

We're all waiting! I'd even take Hillary Clinton at this point.

He'll get reelected anyway since he protects the illegals.... We all know the illegals do vote in this damn city. It's not that hard to fraudulently vote here!

The corruption in THIS ravaged City Hall has a life of its own. There is no lawful reason for why crooked politicians are STILL allowed to openly practice their corruption, graft and greed, which is a solid testament to how deeply flawed and rigged the two-party-machine-failed system is from WITHIN.

Now, over the past 28 years, I have done everything as a constituent to alert my city councilmen (plural), assemblyman, state senators, congressional representatives (who don't represent) and even public watchdog agencies, and the system continues to entirely fail me, because the corruption is stronger than the willful ability of these empowered, government bought idiots to do their jobs, instead of ignoring ever languishing constituents like me with impunity.

And, I don't care HOW many people are investigated by Preet Bharara when criminal psychopaths like Sheldon, Dean Skelos (and son Adam) are STILL walking free (pending their appeals), after they have stolen from We, the People like penny candy from a store. There IS no leadership in city and state government in New York, and until public corruption is legislated to be a capital offense, then this dehumanizing crime spree will never end (while everyone else in the rank and file continues to pay a soul-crushing price)!

How much $$$ does he have in offshore accounts,re:Rivington House.