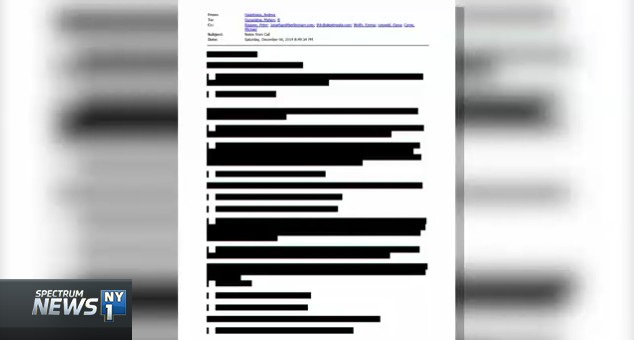 Shortly after Mayor Bill de Blasio met with the U.S. Attorney's office Friday morning, City Hall released a trove of documents concerning communications between the de Blasio administration and outside advisors, known as the "Agents of the City." NY1's Bobby Cuza dug through the documents and filed the following report on what he found.

On what turned out to be a bad news day for the mayor, one where reporters were busy reporting on his meeting with federal investigators, City Hall decided it was a good time to dump some documents — about 1,600 pages in all, including correspondence between the mayor's team and a handful of outside advisors.

Another outside advisor, John del Cecato, is told in one email that the mayor "would like to start talking to you daily."

And a third agent of the city, Nick Baldick, told that the mayor wants to get in touch, wrote, "He usually calls my cell."

But it's del Cecato who seems closest to the inner circle. De Blasio himself tells his scheduler, "Chirlane and I need a call with him scheduled for this weekend."

And in many cases, including many emails from the mayor himself, huge portions are redacted to the point where multiple pages are completely blacked out.
Posted by Queens Crapper at 9:59 AM

Bill says: Freedom of the Press! Except when they want something from me.

It's ever so clear why he went to Park Slope every day to work out and then head to City Hall at 11 am every day. When it got to sketchy to meet in the office, mayor big slow was meeting and messaging with his scumbag agents at the Y.

The only working out was the distribution of favors for those wormtongued lobbyists clients.

As long as failed leadership like this is able to continue without impeachment, then there will never be any pretense of honest, ethical, inclusionary, NOT FOR SALE leadership (that leads by example).

We the People have been duped, bilked, scammed and damned since more than a century ago when Boss Tweed was at the helm of Tammany Hall, and nothing has really changed, except to get worse. Let us not beat about the bush, fellow patriotic citizens: American and New York City are not governing bodies of democracy any more (if ever). We are ALL at the mercy of a system that betrays public trust (and taxation without representation) SO COMPLETELY, that it now DEVALUES all honesty itself——to pathologically high treasonous, traitorous and tyrannical effect——and, the public be damned (again and STILL)!

He's the Teflon Mayor of NYC .

I can't see the electorate giving this con man another 4 years.

How is the Mayor's behavior differs from that of a Council member, a State Senator or State Assembly member? Don't all elected meet with special interests and ask and receive campaign funds?

de Blasio repeatedly told the press "We have nothing to hide, everything was done legally." and yet we are seeing hundreds of pages of redacted documents.

Alas, with THIS terminally 'crooked-and-corrupt' mayor of epic fail——ANYTHING can be justified! Right now, New York is a city that is plagued by a willful dereliction of public duty and a 'taxation without representation' epidemic that continues to reinforce all societal collapse, lawlessness, vigilantism and outright tyranny and anarchy in the streets (currently in mid-level progress). And, the public be damned (again and still)!

Nothing every changes in New York City and New York State government (except to get worse)!