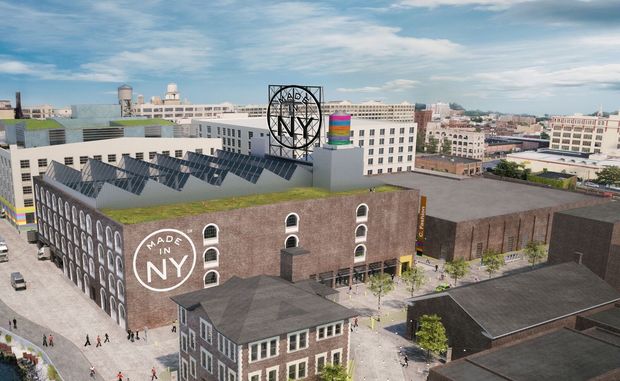 The city will spend $136 million to renovate two rundown buildings at Bush Terminal, creating a campus where textiles will be created, movie and television shows filmed and food manufactured.

The project, called the Made in NY campus, is part of de Blasio's pledge to create 40,000 jobs that pay $50,000 and up over the next four years, and to eventually create 100,000 such jobs over the next decade to help New Yorkers struggling to afford one of the most expensive housing markets in the country.

The mayor, who is running for re-election this year, has pegged the plan as the natural extension of his affordable housing plan.

"Folks got used to struggling just to get by. We want something better for people," said de Blasio.

Details on where the 40,000 jobs will come from are still sketchy.

And who will run this? And creating jobs is great, so long as you aren't importing the employees from elsehwere. Then it defeats the purpose.
Posted by Queens Crapper at 6:30 AM

The only manufacturing jobs the city can attract and produce are is from the malodorous and mediocre film industry. The only ones that will truly benefit are the online streaming networks.

Is this suppose to justify the building of the idiotic gentrification BQX trolley?

It's quite obvious that residents will not get these jobs. For the majority of people in said industry are from other states.

Why would anyone with any business sense start a textile manufacturing facility in a city with the highest utilities, HIGHEST TAXES, and FIFTEEN DOLLARS PER HOUR MINIMUM WAGE?

The glory days of textile manufacturing in Queens are gone FOREVER...

Who's paying for all this? Oh, that's right, the same people who are paying for DickBlasio's defense!

Amen on the imported employees!

Remember to add the various tax program incentives to the $146 mil...

Also, when I first heard DeB talk about a $50,000 salary, I realized just how ripped off I am!

More bullshit.
You need to be in one of the IATSE unions to get those TV & movie jobs.
Problem is that union is father & son union deal and nobody gets in unless someday dies and your a relative of the the family member died, were willed you the job by a member that died and passed a vote by other members (my case). It appears the only others who did get in were minority's from the BOCES schools, this to stay legit and call themselves non discriminating. (something about needing big tax credit)
These jobs will be filled with industry people from California who are bailing from that cesspool like rats.
Great jobs, you go work in the morning, setup then go up in some theater balcony and take a nap. Long evening breaks and your on the clock for the full duration. The downside is the dues are ASTRONOMICAL, When I worked at NBC/ SNL. I would earn earn $3800 for Thurs, Fri, Sat and only see $1800 after taxes and union deductions. The hours are absolutely grueling !!

The unions want more studios in NYC because the Chinese are buying all the studios in LA and cleaning house. I wonder how much the unions and studio owners are paying off the mayor and his people. Must be $$ millions.

Once again the mayor is feeding the public shit and calling it a meal and the bad people are jumping for joy.

Now, I don't care if Mayor 'Tall & Stupid' develops a conscience, much less REDEVELOPS a terminal—it's waaay too late to redeem himself when he's never stopped betraying public trust with impunity in the first place!

Say goodbye Mr. Bill—time for your disgraced closeup (or criminal mugshot, as it were—whichever comes first!), while the infamously animated steam roller proceeds to flatten you to cardboard, as the notorious, Saturday Night Live character made of clay, Mr. Bill cries out in his final, closing plea: ❝OH, NOOOOOOOO!❞

That's what you think !!
Have you lived in Queens more then 1 generation or are you from Ohio ?
Just watch these deaf dumb and blind jackass voters reward Big Bird with re-election, --add that back-stabber twitt Crowley too. Just watch !!!

Thanks to people like these bastards I'm having a hard time selling my house in Ridgewood, buyers RUN LIKE HELL when they see half the 3rd worlds feral youth exiting PS-68 and IS-77.
These are schools their kids would go to and buyers want no part of it, they wont even go in the house to see the inside. They get right in the car and leave in under a minute.

All you guys bashing DeBlaz should look at what is next in line - VanBramer and Chrissy Quinn.

LOL!
With the FBI crawling up his ass, Bog Bord Bill will be directing his affairs in an orange jump suit in a federal prison.
That is, if he's not too tired our from avoiding his amorous cell ate, Bubba!
Sweet dreams and lubrication creams, Mr. Ex Mayor!

Hahaha, the outsider "we feel your pain" snowflakes, in their thousand dollar gowns and tuxedos (right Meryl stupid Streep?), limos and parties.
Perfect complement to Wilhelm the job destroyer if you ask me.

Potential candidates will be referred from the District Attorney's office because they will be criminals. Just like with nearby Uncommon Goods, they only hire thugs. And get tax breaks and subsidies for that.

VanBramer and Chrissy Quinn ?
Oh jeez, I rather have Anthony Weiner