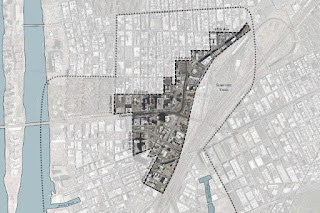 The city is eyeing a 50-block swath of Long Island City for possible rezoning, an effort to spur development of more office space and affordable housing — but some locals worry the change would only speed up gentrification in the increasingly pricey neighborhood.

The Department of City Planning held a community meeting Tuesday about a portion of Queens Plaza and Dutch Kills, the first in a series of public discussions over the next several months before officials make specific zoning recommendations sometime this summer, they said.

The goal is to encourage the creation of more office space in the area — which has been dominated in recent years by new residential construction — and to implement the city's new Mandatory Inclusionary Housing (MIH) amendment, which would require developers of new buildings in the area to construct affordable units on or off-site.

Worrying about gentrification in LIC at this point is like closing the barn door after the horse ran away.
Posted by Queens Crapper at 6:57 AM

You are a little too late by about a decade. Certainly had no problem when the first couple of towers were being put up and long time residents were being displaced and could not afford to rent or buy anymore (me included). NOW you are concerned, so the rich are being concerned about the invasion of super rich.

glad this is office space, which is badly needed in LIC if this city is ever going to have commutes under 2 hours. there should be a moratorium on all market rate housing there

And we all know who will be dropping down on his knees to kiss the asses of the developers who will kickback money to him , don't we?
COUNCIL MEMBER JIMMY VAN BRAMER!
He's a whore for hire.
Didn't he already take chump change from the Wolkoff family , for his vote of approval in the city council, to build mega monster buildings on the former 5 Pointz sited at Court Square? Yes, he did. Jimmy can be bought for ice cream money.
This phony labor union champion sold out, because non Union labor is what Wolkoff is using!
Correction: Jimmy is a two dollar whore!

glad this is office space, which is badly needed in LIC if this city is ever going to have commutes under 2 hours. there should be a moratorium on all market rate housing there

You must really think people are stupid. Are you going to hire only people that live next door? If so, what you really need is a coal camp in a Kentucky hollow.

There goes the view of the city from Maspeth.

Any time people try to fight for their community they should be encouraged.

And believe me, the Democrats that have a stranglehold on us for decades have an Achilles heel - vulnerability to the public rising up to them and saying 'NO!' If that really happened they crumble like a pack of cards.

Whatever you can say about Trump (and there is more than a lot), he did show people one thing, something that many have suspected all along: from the party bosses to the rank and file, they are all an empty shell full of smoke and bullshit and little else.

If that community got really pissed off and ignored some of the "they are too late" that the hacks are writing here, development would come to a screeching halt.

Any time people try to fight for their community they should be encouraged.
If that community got really pissed off and ignored some of the "they are too late" that the hacks are writing here, development would come to a screeching halt.
----------------

Yes, encourage folks, but at the beginning process, not at the fucking end, when yes, it it late since much damage already takes place by that point. No one is saying do not do nothing, just don't wait till it is all in place and then do something, that solves nothing.

City planning is a liar and don't know what they're doing. They allowed much of the current overdevelopment and now want to bring in office space? Where?!? There's no room as it is because of all of the residential building. Agree there needs to be a moratorium of further residential building.