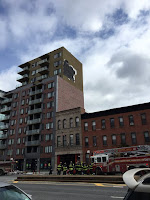 Strong winds tore pieces of the facade off a luxury building that opened to renters just three years ago on Fourth Avenue and Sixth Street on Monday afternoon, the FDNY said.

Several FDNY companies responded to a 2:56 p.m. report of "Styrofoam-like debris" raining down from 278 Sixth St., which is right next door to FDNY Engine Company 239's firehouse, an FDNY spokesman said.

In addition, a Fresh Meadows gas station collapsed and trees came down:

Posted by Queens Crapper at 5:18 AM

Right in front of a firehouse too.

This will not certainly be the last of them. All of these new buildings, fasttracked by Mayor's fun size and big slow, are going to collapse, externally and internally from the elements.

Yes...fast tracked cheap curtain wall construction peels off like aluminum can siding off of an encased house as soon as Mother Nature passes wind.
Crap is crap. Shit is shit. To top it off we have a crappy crooked bribe scandal ridden DOB who looks the other way when cash is offered its inspectors.
The Marachino cherry on top of the tripple scoop shit sundae is mayor Wilhelm Der Blasio.
His pockets are stuffed with developers' campaign contributions.

This is a failure of regulation -ceding power to "self certification".

However, these buildings still have to-code wiring and plumbing and are not made of combustible structural elements. They are not firetraps.

EIFS is a pox on the built environment.

A lot of homeowners do not take care of their homes and we get haz mat hurled at us by the weather as we pass. DOB must be stricter.

They build these buildings too fast and it's such a safety hazard. I'm sure they weren't even double checked by an inspector after they were finished being built and if they were, the inspectors were probably paid off.

If this is how shoddily built "luxury" buildings are, I shudder to think how terrible ordinary construction must be.

-The slap up, spray on Euro-fucco is no good for these climates and should be banned for all building. This is the same VOC compliant garbage they "upgraded" the Space Shuttle fuel tanks that kept falling off in sheets.

Not only do you see a lot of substandard construction in Queens, buying property in this borough is a very expensive proposition. Queens is the 4th or 5th most expensive place to buy a home in the entire country. Think about it, it costs more per square foot to buy a piece of the American Dream in Queens than in places like Beverly Hills, Greenwich CT, or West Palm Beach. And for that premium price you get a tiny property in a noisy overdeveloped borough. Also have to deal with all sorts of idiots and morons and psychotics. Ever rode on public transport lately? All sorts of crazies on the trains these days. I think the mental hospitals are letting people loose on the street.

So we can build even taller buildings.
Waiting when the Flushing Armory will be a mixed use, 30 story condo.
After all no parking (Muni Parking taken over), no place to walk, drive, live in Flushing. Matter of time.

Continue to build non union and that will be the result every time.