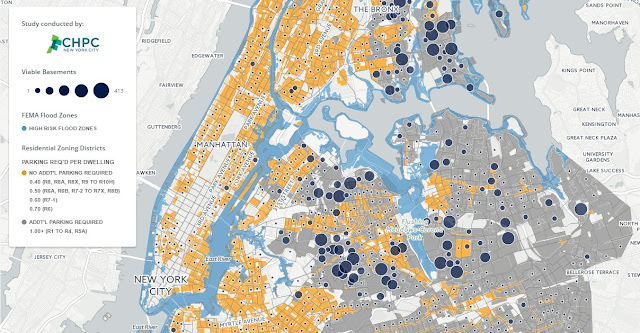 There are up to 210,000 basements and cellars across the city that could potentially be converted into legal apartments—enough to move the needle on the city’s housing crisis without pouring a single new building foundation.

But the legalization process is fraught with political and technical pitfalls, which is why a study released Thursday suggests that the de Blasio administration should start with a pilot program to capture the lowest hanging fruit: the roughly 38,000 basements in single-family homes that could be converted without any major changes to city or state law.

Trouble is, an interactive map provided along with the study shows that there is no ideal place to launch the pilot. While the simplest conversions can be found in Manhattan and parts of Brooklyn and the Bronx—neighborhoods where homeowners would not be legally required to provide an additional parking space for each additional housing unit—these areas are not flush with suitable basements.

Far more potential exists in Staten Island, southeast Brooklyn, Queens and the eastern portion of the Bronx. These are also areas with high rates of foreclosure, suggesting that homeowners there would benefit from supplemental rental income. The only catch? By law, adding an apartment to a single-family home in many of these areas would require the creation of an additional parking space, posing significant economic and logistical challenges.

The study suggests finding a community that both supports the concept and has the inventory of basements, and calls on the city to provide homeowners with financial incentives, a list of knowledgeable contractors, expedited permits and waivers or modifications for certain building regulations that could be changed without city or state approval.
Posted by Queens Crapper at 6:42 AM

Usually, Crain's is very diligent, thoroughly informative and unbiased in it's reporting on real estate. But Queens might be the city capitol area of basement studio and apt. living. In fact, when I was a young lad apartment hunting in the borough and Brooklyn through realtors, 100 % I saw were basement apartments.

Eventually, I lived in 2 of them, the first one converted with drywall sheets and lousy plumbing and a hollow door which was broken into and the other was the basement of a 2 family house that I dwelled in for over a decade until a work injury economically put me behind and I wound up losing the place.

A lot of viewers here will vehemently disagree, but this can be done properly with the proper precautions and fundamental items like smoke and monoxide alarms and fire extinguishers and if there is a proper exit like a backyard door. And also if tenants are paying rent on time, avoid using scented candles and cheap trisonic power strips from the 99 cent store to power their appliances and home entertainment systems.

The problem is the majority of individuals doing this are greedy and unscrupulous and own massive properties, like that bastard scumlord in the Bronx that let a plague fester in the basement of his building, and probably bribe DOB inspectors to give them a pass. Whilst middle class homeowners, in order to keep up with the constant inflation of costs of utilities and taxes, especially in the last few cruel years, have to resort to eking out extra space for rentals to survive. In fact this isn't that different than De Faustio's and NYCHA's Rebny stooge Oyalte to cordon off supposed unused space and squeeze in market rate tower development to fund project housing.

Don't take this as an endorsement for this proposal, it's not. For it's another rotten one by the city to avoid the fact that this corrupt mayor has broken his promise to the working poor that there is nothing that can be done for them and they must settle with hotels and cluster sites while they wait to win the lottery for the meager crumbs of affordable housing units begrudgingly obligated by the predator developers sheetrock and glass monoliths. This was just an acknowledgement of an open secret that's been allowed for years.

I'm not aware of any community that has benefitted from having these extra basement apartments. Yes, the apartments provide necessary housing, but the extra people have created more garbage which is usually dumped everywhere, more crowding in local schools, less parking, more fire hazards because of the crowding, and increased crowding on transit. We need less of these apartments, or no legalization without improvements in infrastructure and services.

This has been happening all over Queens for the last 25 years. Half of the houses on my block already have illegal cellar apartments that the City will not stop even if inspectors got in to document. No taxes paid, no counting on the census, no additional services in the area. The only time this gets stopped is when some poor bastards get trapped during a fire and are burned to death.

Jeez, that map looks like a strategic gas attack plan in a war room.
Its the last domino needed to crush & destroy the last holdouts: Ridgewood, Glendale, MV, and Whitestone with democrat voters.
What does the NYC mayor have against white neighborhoods and people ?

Already too many of them and of course illegal.
Converting garages into them too.
How can you enforce when they don't even allow inspectors in to see the illegal conversions?

Crooked De Blasio needs all of the votes he can get.
Sanctuary city is here to stay.

Basement apartments are often put together with slapdash amateur construction by the homeowner. This could lead to fires, gas explosions, and other hazardous conditions we would all have to pay for via firefighters and other emergency personnel. Then, tenants would need additional parking, when parking is already way above the crazy scarce level in most neighborhoods. These apartments would also be havens for illegal aliens and other people whose income does not match that of the neighborhood, causing a deterioration of the neighborhood.

Once deportations pick up steam, many of the currently illegal basement apartments will start to empty and perhaps the housing demands will find some equilibrium for a time...

That is what killed so Richmond hill and ozone park.......

How about the novel idea of housing for American citizens or immigrants with the proper papers?

Our infrastructure is collapsing (yes that is the word) because of illegal immigrants, a large group of people that export monies from communities to their home countries, and, through Democratic party policies, absorb even more monies through taxes diverted to support this budding Democratic voting bloc, services (though agencies staff with Democratic voters). and infrastructure needs which drain resources and quality from the rest of us (hospitals, schools, transportation, housing etc)

I couldn't be more opposed to this. And I can't believe the fire department would support this.

I have a finished basement in my house with a separate entrance . It's not an apartment ( there's no kitchen ) and I don't illegally rent it . But this can be done correctly . I would love to rent it and make an extra 1-2k a month. The city needs more places to live .

That "Human Scale NY" group advocates turning basements and attics into apartments and increasing the density in Queens.
They say that Tribecca would not be so densely built if Queens got rezoned for 5-6 and 14 story buildings.
And look at all those dumb groups , like the Queens Historical Society who fell for their historic preservation malarchy.
Fleece those sheep!
Hey, dummies read between their leader's lines.

Haa Haa right, you know nothing about being a landlord.
Just watch what some real estate broker brings you some un-desirable and you could be sued for discrimination if don't accept.
Do you have any clue how much $$ (and time)it take to get a liberal democrat judge to sign an order for a sheriffs to evict a bum tenant's in this city?
Worse if its a pregnant female or one with kids in school. The average cost is about $20K-$30 in rent, heat and electric not including 30 wasted days to housing court and building damage. A sheriff also can not do unless a shelter is available.

--Find a good lawyer first and do not use a real estate agent because they cant discriminate ! However if you reside in your home and rent privately you CAN. The problem is to many immigrants come to New York to get pregnant and work the system.

Actually I do . And "no" you can not break housing laws just because you live in the home. If someone's last three years of tax returns show solid income and they can pay the deposit , first and last months rent plus pass a background check them I'm sure they are ok.
No it does not cost 20-30k. Where did you get that number ?
>> Haa Haa right, you know nothing about being >> a landlord.

This is a great idea, especially for us young adults who are looking to move out of our parents' house and get our own place, but can't afford the ridiculous rents of regular NYC apartments.

I can't speak for other neighborhoods, but most of the apartments in my neighborhood are occupied by 20somethings on their first job, most of them NYC natives, who don't have a car and get around by bus and subway. (In a two-fare zone neighborhood, too.) And all the basements have a separate exit.

On the other hand, homeowners might not like their basement apartments going legal, so they're suddenly on the hook for all sorts of rules and regulations from the city, including the extreme difficulty of legally kicking out deadbeat tenants. That could easily eat up all the earnings from the apartment, and wind up costing them money instead. As a result, the cost to rent said apartments would go up, and then they wouldn't be affordable any more.