Turning beauty to blight on SI 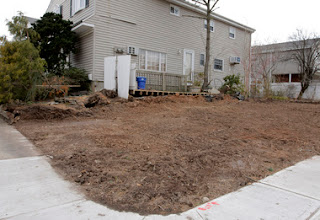 The builder of the controversial Port Richmond “skinny house” has taken ownership of an even smaller property in Midland Beach and clear-cut it, with no apparent future plans to build.

For more than 40 years, an undeveloped parcel of land at the corner of Adams and Haven avenues — next to Mark and Carol Meyer’s home in Midland Beach — was a blossoming, tree-lined garden.

“I had cancer, and it helped me to be in the garden,” Mrs. Meyer said.

The property is 15.5 feet wide by 75 feet long, according to city tax maps. It has changed hands at least four times, but because of its size, nothing was ever built there.

“For 42 years it was empty, and I used it,” Mrs. Meyer said. “People were throwing stuff all over, and I made it beautiful. And [the developer] just chopped everything down. I don’t know for what.”

The couple had inquired about purchasing the land in the past, but they were assured by the city Department of Buildings that nobody would ever want it because there isn’t much anyone could do with it, Meyer said.

After Cee-Jay Real Estate Development Corp. bought the land, the parcel was cleared of all foliage.

Now the Meyers look out on a muddy patch of land.

Sadly, I look at the "blame-the-victim" comments on the site and see a familiar line: "They should have bought the property when they had the chance." Rather, the City shouldn't allow the utterly ridiculous practice of building too-skinny houses, and we wouldn't have to worry about who owns the property. It actually already doesn't allow houses on narrow parcels. But this developer will no doubt go to the BSA and get approval, just as he did last time. If it wasn't already a slam dunk that he will get such approval, he wouldn't have purchased the property to begin with, and the little forest that the cancer survivor planted would still be there.
Posted by Queens Crapper at 12:37 AM

And they believed it and made no effort to secure it despite their whining to the press on its importance in their lives.

So they made like it was a free government program that would last indefinitely.

Stop. You believed the Dept. of Buildings? That's your problem right there.

They have no interest in telling you the truth, even if they knew it.

Anon 1: this was "bought and sold 4 times" as part of a bundle - not as an individual propoerty. This developer is responsible for MANY developments - he buys a non-conforming parcel, knowing what he's getting, then goes to the BSA pleading hardship. He is also the entity behind the proposed development of almost 90 homes across the street from the radium dump, in a we-ain't-kidding flood zone (see previous photos of mallards swimming around the site). He bought that parcel, and planned a dense industrial development, the realized money wouldn't be made, so sought to re-zone the entire 9.5 acre property for residential... and in the midst of that, declared bankruptcy. The appears to be on paper only, however, because he is the contractor for the site. He is a b a a a d man.