Yay or nay on styrofoam ban? 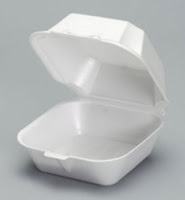 Barely 24 hours have passed since Mayor Michael Bloomberg proposed an all-out ban on plastic foam food containers in the city and already New Yorkers are asking: So what do we use instead?

Mr. Bloomberg's announcement, made Thursday in his State of the City address, left consumers and food vendors big and small wondering what a city free of plastic foam might look like.

Polystyrene foam containers have long been used by street vendors and take-out restaurants as a cheap way to keep in the heat—and sauces—of meals sold to on-the-go customers.

"If they ban it all, we'll have to use aluminum storage containers," said Paul Gopaul, 29, owner of the popular Midtown food truck Faith's Halal Food. "Definitely we'd have a price change."

Mr. Gopaul estimated he uses 500 plastic foam food containers a week, which he buys in packs of 175 containers that sell for $15 at a Queens supplier. The aluminum containers of equal size run about $5 more per pack, he said.

If the City Council were truly concerned about our environment, they wouldn't allow powerplants to be built on parkland by private corporations and wouldn't approve contaminated schools.  I guess they feel doing this would make up for their other transgressions.
Posted by Queens Crapper at 12:03 AM

It's less than 3 cents more a container for aluminium. I don't know which is better but raising prices because of a 3 cent cost increase?

Let's consentrate on protecting our parkland for future generations.

Aluminum containers aren't so great either.

I'm brown bagging it. Too much fat and salt in take out food anyway.

Tens of thousands of styrofoam manufacturing jobs will be lost. Actually 99% of those jobs are in China. If anything,it will help with their air pollution...
NYC consumes nearly half of all styrofoam products used in the entire US. Amazing .

So now the streets will be littered with Aluminum garbage and not styrofoam.


Aluminum -> recyclable. You'll see scrap collectors going around for them. Don't you think restaurants might want to collect them so they can pocket the scrap value.

Me neither, The hot coffee taste sort of "ok" but once it cools down you can taste the styrofoam. Dunkin' Donuts is the worst with this.

"Aluminum -> recyclable. You'll see scrap collectors going around for them"

You may get about 20 cents a pound. You'll need probably 100 pie plate size hunks of aluminum to make a pound after they have been cleaned. That's a lot of work for 20 cents.

Maspeth Mom...
Getting rid of styrofoam will be a good thing. Its soft and the chemicals leach into the foods served in them....I never eat anything served out of styrofoam..all these chemical in the food can change your hormones and cause your to gain wait.

Less garbage into the system is beter for all...

I'm not against banning of styrofoam. I am against another nonsense, time and money-wasting agenda from Bloomberg when there are more important things to spend money on, like new contracts for PD and FD, less cuts to transit and libraries, etc. Let's worry about essentials before we worry about banning soda and styrofoam.

Under that thin coat of "Euro Stucco" being used to clad some new homes and retail buildings is styrofoam insulation.

Get rid of them