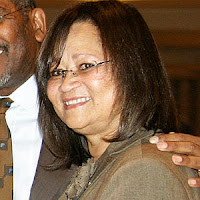 A Queens attorney who has been at the center of high-profile controversy in southeast Queens in planning to run for the New York City Council.

Joan Flowers, who has worked for Gov. David Paterson, Rep. Gregory Meeks and state Sen. Malcolm Smith, confirmed to The Insider that she is running for the council seat being vacated by term-limited Councilman Leroy Comrie. Ms. Flowers was at one point reportedly the target of a federal probe into the New Direction Local Development Corp., a charity founded by Mr. Smith and Mr. Meeks in 2000 that used the same address as Ms. Flowers' law office. No charges were filed.

A 2010 profile in the Post described Ms. Flowers as the "Zelig of Queens political scandal," though it also described her as "coerced into doing questionable things by her so-called friends because she's such a nice person." The race for Mr. Comrie's seat has so far attracted few other candidates.
Posted by Queens Crapper at 12:39 AM

Just what Jamaica needs another corrupt and questionable figure to run for City Council. Although I felt that Councilman Leroy Comrie (whose seat will become vacant) could have done even more for the community of Jamaica, he never the less, was a very small handful of Jamaica politicians that was not involved in some type of corruption or scandal among Jamaica's rogue gallery players and was instrumental in the cultural arts of the community as well as other important issues.

So it is very disturbing to hear that an extremely questionable individual, Joan Flowers, which scandal and shady dealings are part of her background is attempting to put her hat in the ring for City Council, District 27. Jamaica, which is in dire need of quality leadership to help turn it around, does not need such a shady individual politically involved in our community.

I urge all of Jamaica residents to send emails to concerned community individuals, family members and friends urging them (if Joan Flowers decides to run) to make sure that she is not put into office. Make your voice heard, write in Miles Davis, 50 Cent, Bugs Bunny, Stewie from Family Guy, anyone but this very questionable figure who would not have the best interest of the community at heart but continue to push Jamaica further down into the gutter.

SAY NO TO JOAN FLOWERS FOR DISTRICT 27 COUNCIL.

the way New Yorkers vote, sounds like she's a shoe-in for the job

Joan is a very decent person. Let her win.

Would the one anonymous person who stated "Joan is a very decent person" care to elaborate. Being decent has nothing to do with one's ability to be a political leader in a community that is in dire need of honest quality leadership. "Joan Flowers is under federal scrutiny for her role in a shady Queens charity, represented the Rev. Floyd Flake and others in a deal to turn a nonprofit housing development owned by Flake's church into a for-profit venture, according to recent reports. Questions have been raised about the structure of the deal, and Flake's take." Does not really sound decent to me or having the best interest of a community in mind.

As far a party activist, who did not state his name, said "I think that she's been coerced into doing questionable things by her so-called friends because she's such a nice person". Well nice does not cut it either for a leader, one must be able to stand up for what is right and wrong and not be coerced into "questionable" actions. She would be the worst candidate in the community of Jamaica. Questionable actions, trailing with scandal and no backbone.

SAY NO TO JOAN FLOWERS FOR DISTRICT 27 COUNCIL.

If Queens is well known for breeding crooked politicians, then Jamaica obviously spawns the creme de la creme of corruption!

Just put a "-D" next to her name and the constituency will follow like the sheep they are.

Where are the Rs, the Is, and other parties? Why can't they get involved in the process?

The Democrats in Jamaica and elsewhere in Queens have become far too cozy in their seats. For meaningful change, a Republican or an outlier-Democrat needs to win. So unless you find the Republican or Independence challenger in this race so repugnant that you have to recuse yourself, you must vote against her. Write-ins mean nothing; it is like sitting on your hands.