Flooding bill too little, too late 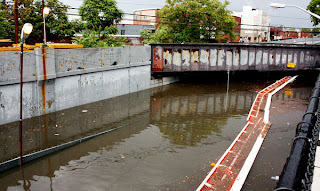 A bill that would help prevent flooding after intense storms — an increasingly common scourge of many homeowners in some areas of Queens — was passed by the City Council last week to the applause of a Queens councilman.

The legislation, passed Feb. 6, requires the city Parks Department to identify types of vegetation it could plant that would help absorb stormwater before it could overwhelm storm sewers, causing a mix of polluted rainwater and sewage to overflow.

“In Queens, we know the challenges of managing stormwater all too well,” Gennaro said. “Several areas in our borough, and in the rest of our city, are prone to flooding with rainwater after heavy storms.”

Areas of Fresh Meadows, Forest Hills and other parts of the borough are particularly vulnerable to flooding, with many area residents saying their homes become inundated by a mixture of stormwater and sewage during intense storms. Some have complained that as soon as they fix the damage from flooding the next storm will hit and they will be deluged again.

Flooding is also occurring more often in recent years as intense storms happen more frequently than in the past, a development that Gennaro has attributed to climate change.

Gennaro said the flooding is also due in large part to the urban transformation of the city, with large portions of the previous natural vegetated landscape morphed into swaths of concrete, which does not absorb rainwater.

Oh? And who allowed that to happen?
Posted by Queens Crapper at 12:09 AM

How's that progress on the seawall-dam in the Lower Bay-Atlantic Ocean going? 4 months after Sandy?

What did they do in 1938 when the hurricane redesigned all the barrier islands?

Anon No. 2: Put in place what we had until Sandy hit.