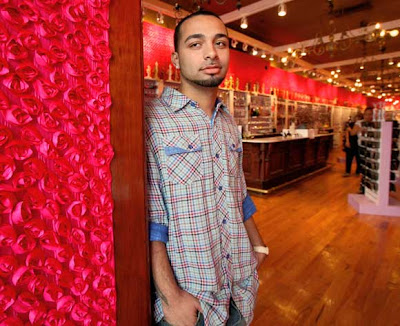 Illegal changes at the old Gage and Tollner building in Downtown have the Landmarks Preservation Commission seeing red — and hot pink.

The owners of a garish costume jewelry store operating inside the former home of the legendary gaslight-lit restaurant must tear down their newly installed Pepto Bismol-hued wall panels, commissioners voted unanimously on Jan. 22.

The Fulton Mall trinket shop Ladies and Gents dramatically changed the landmarked interior of the shop between Jay Street and Red Hook Lane without presenting a plan for the alterations, blocking iconic cherrywood trim and mirrors with bright pink hanging panels in the process.

But all that glitters isn’t gold, according to commission vice chair Pablo E. Vengoechea.

“Hiding something behind something is not a preservation strategy,” he said. “We designated this [space] in order to be able to see it.”
Posted by Queens Crapper at 7:59 AM

Isn't it about time the LPC grew a pair?
YET--if this happened in Queens, the Betts-Tierney devil's duo would have let it pass.

In this borough we still get the shitty end of the stick from the LPC and, of course, city hall.

She's the big fly in the ointment that's holding back
landmarking in Queens.

Decisions are made by this nasty gate keeper, then forwarded to the rest of the nutless commissioners who follow her directions.

Bumbling Bob Tierney is chair of the LPC only in name. He's also tied to Bett's skirt.

After serving 2 terms as a trustee of the Queens Historical Society, I know damn well what I'm talking about through direct brutal experience with the LPC.

in addition, most of Queens' politicians are anti- landmarking, although they talk up a good game to the contrary, especially before election time.

Jerry: Funny you should mention Crowley and Vallone talking "up a good game". These two talkers showed up at a Saturday press conference by the Civic Virtue statue exactly one week before the statue was hauled off to Brooklyn. Did they know about the statue's removal and showed up just for the cameras? Hmmm? My suspicions have been aroused.

Typical Bukharian or Paki bullshit and bad taste ! No doubt everybody involved must be related.
These people would put a pink elephant outside and call it a doorway.
Good chance some payola involved to keep people quiet. All them nasty abortions, junk and paint to the property didn't happen overnight

And this is what replaced an historic NY institution?
What crap! They may have well just put in a Dunkin Donuts or 7 Eleven ....

Mary, who's the "hottie" leaning against the hot pink rose backdrop?

One good thing about Queens.

The preservationists, with smirks on their faces play along with the few dups with the boro that doesn't get whats going on behind the scenes.

Then something like this from Queens shows up at their door step. Get used to it boys n girls cause your neglect of the forgotten borough insures that a lot more like this is out there just ready to show up 'in da Heighs.'