There's no "there" there 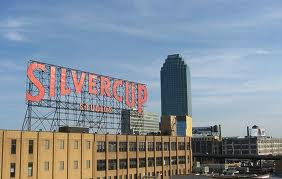 Is Long Island City the next Murray Hill? Or the next Williamburg? Or has it gone straight from being like the old industrial before-it-was-cool Williamsburg to the future no-longer-cool because it’s all I-bankers living in luxury towers Williamsburg?

Will the neighborhood that has long felt like the middle of nowhere, despite being close to everywhere, finally feel like somewhere? And most importantly, what will that somewhere be like?
The problem with Long Island City is that it isn’t the industrial, taxi-cab, commercial-bakery filled hub that it used to be, but it can’t figure out who it wants to be. It is neither cheap, nor charming, nor particularly gritty anymore, which means that no one is willing, or able, to claim it as their own.

Its “rebirth” at the hands of developers, rather than the usual artists and creative types, has put the neighborhood in a strange position. Unlike nearly every other patch of ground in New York, whose identity is constant battleground between the old-timers and the new-comers, Long Island City is a no man’s land.

But in a larger sense, yes, it really does matter. A safe neighborhood with abundant housing and an easy commute that is grudgingly accepted because it offers “value” is, if not a total failure, then at least a huge disappointment. It’s wasted potential, a missed opportunity and something that, from an urban planning perspective, we should look to avoid.

As a recent editorial in the Architect’s Newspaper argued, the mega-projects rising around the city lack quality of place; their scales are vast, their public spaces uninviting, their surfaces too sleek. The city cedes control to developers with the resources to build these neighborhoods from scratch, willfully ignoring that while developers know how to physically transform a landscape and make money doing it, they know almost nothing about building a community or a sense of place.
Posted by Queens Crapper at 12:14 AM

The rezoning was forced upon the community. Instead of allowing the change to happen organically, it was thrust upon Long Island City and the result is a sterile no mans land. Be careful what you wish for.

Developers care nothing about community, or sustainability. It's ALL about profits - which then leave the community. I propose the top 10% of each development company agree to live in their construction for at least five years if they get a single penny of public support/incentivization... and that includes re-zonings. Hey, and apply the same rule to their land-use attorneys, too.

That's because new neighborhoods with glass and steel towers leave no space for organic structures like shuls, churches or mosques.

The religious folks must either rent space in a community room within one of the towers or have enough funds on hand to afford a parcel of land on their own.

Other things like day care centers, community gardens and supermarkets appear fake and imposed at the developer's benevolence, rather than from the grassroots efforts of the community.

We are not out of the woods on this economy - a small financial sector is propped by a mountain of debt.

Debt is fine if its a band-aid until the real economy gets going but that is not happening.

Sooner or later the bottom will fall out.

LIC of 2013 is like Harlem of 1905 - over built with a large group of disadvantaged waiting on the wings.

When those construction mortgages fall due they will fill those buildings with livestock if they have to in an effort to find an income stream to service the construction debt.

Since the money to build these buildings is not local, but hot rootless funds sloshing around the world looking for a home, there will be little interest or care as to the longer term fate of Long Island City.

Slash and burn will describe the market then.

It ain't gonna be pretty. Jamaica, Flushing, Elmhurst will be joined by 'LIC'.

Once again we can think our low voltage politicos for this. Rubes once again taken to the cleaners by hucksters.

This article is saying exactly what I've been thinking over the last few years about LIC. It is unfortunate that developers have monopolized it instead of the community being able to birth itself. But that's what happens when developers price those most likely to build a community out of a neighborhood in favor of tasteless, bland, white collar people who actually dislike the borough that they live in and wish they lived in Manhattan. Luxury buildings and they don't have a freakin' grocery store.

What made Williamsburg a success (at least until relatively recently when developers gobbled up swathes of land and priced even more people out) was that the people who were drawn there were true bohemians who were by no means poor but they did not have massive incomes, either. You can roll your eyes all you want about their attitudes, but they were the pioneers that revitalized the neighborhood and attracted the awful second and third waves of gentrifiers who wanted to relocate there because they wanted some of that hipness for themselves.

As recently as a few years ago, many young people became attracted to the concept of LIC as another urban, industrial neighborhood not far from Manhattan that held so much untapped potential, but at that time, some desirable Brooklyn neighborhoods (and places like Harlem), were still affordable and had already established its cool cred. Let's face it, it's a lot easier to follow the herd than to blaze a trail and strike out on your own.

LIC is a story of premature ejaculation. The media was calling LIC a hip neighborhood before it even was one. The developers, looking for the next cash cow, jumped on it and destroyed the character of the neighborhood and in doing so, obliterated the indie cred it was hoping to capitalize on.

people who were drawn there were true bohemians who were by no means poor but they did not have massive incomes, either.
--------------
The problems in LIC are unique to Queens:

1. politicians, elsewhere regarded as weasels, in Queens regarded by the public as your dog regards you. Both the electorate, and the elected, are all at least 10 IQ points lower than elsewhere.

2. community preservation - as a matter of course nothing (without a developer's approval) can be landmarked or saved. All efforts to do so means no press for your efforts and no funding for your organization.

3. no civic community. If its on your block, your can organize, but once they get stonewalled, the group disappears, or worse, sell their leadership down the river for stupidly taking scraps as 'sensible compromise'. Once the politician squeezes out their photo op, the effort gets tossed into the bin with the rest of the block.

4. all the newbies are apolitical foodies or worse. Take this for example:

After their community was bathed by Sandy in the lethal stew of Newtown Creek and the sewage of the East River, all the daddies and mommies responded by taking their little tykes out for a Halloween Parade.

Says it all folks.

Very glad to be living in northeast Queens!

Very glad to be living in northeast Queens!

Sure if 'gentry' from the Far East and Middle East are your thing... as for me I take the clueless nitwits from the Midwest and West Coast any day of the week.