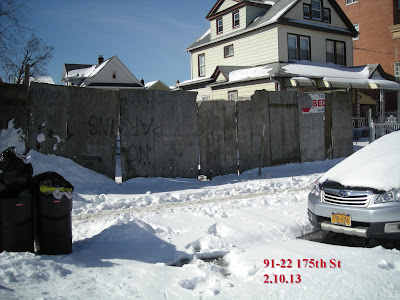 Check out the article in the Queens Chronicle in regards to the empty lot at 91-22 175th St that was strewn with garbage and had a fence falling down, that pretty much none of you did anything about.

Last Sunday, February 3rd, I took photos of an abandoned lot with garbage galore and a wooden fence that was falling down at 91-22 175th Street and sent a scathing email to all the powers to be including the media. Well the next day, it was taken care of (almost 3 months later after first reporting it!). I had reported this situation back in November of 2012 and then reported it a second time on Sunday, February 3rd after checking the site to see if it was ever taken care of. Why it took so long and why not much seems to be done to this owner, Mimie Jagassar, who has outstanding fines of over $45,000 is another big question and another major problem with our system. How you elected officials, who are supposed to represent Jamaica and actually live here, allow this type of thing to happen over and over again is beyond my comprehension.

I have attached a photo of the lot that I took on February 10th. Yes, it is clean-up and the fence is fixed up, but it is still the same shitty wooden fence that will probably fall apart again and garbage will pile up again while this totally disgusting person who owns this eyesore, Mimie Jagassar from Jamaica, will just continue to do what she has been doing for years, nothing. Until you elected officials make some changes to the laws that allow repeat "pieces of shit" offenders like Mimie Jagassar or the rich white trash family the Gottis (yes, those knuckleheads) do whatever the hell they want in Jamaica, this will continue. Time for some of you to grow a HUGE PAIR and stand up for what is right.

Joe Moretti
Posted by Queens Crapper at 12:17 AM

It's a start in the right direction. So much more to do...

Can anyone explain intelligently and without bias, why the city cannot enforce or collect on outstanding violations? Everyday this blog shows us this is a very big and serious problem. We continue to blame our elected officials for these problems but NOTHING has changed. Why?
JP

"Can anyone explain intelligently and without bias, why the city cannot enforce or collect on outstanding violations? Everyday this blog shows us this is a very big and serious problem. We continue to blame our elected officials for these problems but NOTHING has changed. Why?
JP"

If you get a ticket for a open container (25$), you better believe that they will come to your door with a warrant and ARREST YOU.

But for some reason these people owe HUNDREDS OF THOUSANDS OF DOLLARS and it seems to be, for a lack of better words, ALL GOOD.

Criminal scumbag politicians and their cronies.

Here is a DOB fine to a illegal basement hotel on my block. Notice nothing was paid even through the house had a Vacate Order. The home owner never paid the fine !

the upside down no parking boards are just super awesome.

If the government will not do what is needed, the citizens need to take action.

The fact that this notion is "obsolete" shows how much government has overtaken us.

My guess is that it will be full of garbage by then.

That fence is still a DOB violation ... especially if the nails stick through toward the sidewalk!

I really would like to get an elected to act on ECB Violations ... or at least make an issue over the fact that there are millions of dollars in unpaid fines in the ECB. Why??

Why?? That's the million dollar question.
We should be demanding our elected officials act.
Laws need to be changed
What are they waiting for?