How they'll build a stadium in the middle of a river 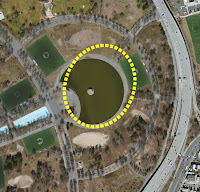 A confidential proposal made by Major League Soccer last year provides insight into the sports group’s closely guarded vision of what a stadium in Flushing Meadows Corona Park might look like, documents showed.

The internal plans, which appear to be a proposal from September 2012, were provided to the TimesLedger on condition that the source not be identified. In several renderings, the plans show that the stadium does not sit at ground level, but will rather be perched on top of a mound of earth that the league calls a “publicly accessible berm.”

Opponents of the park believe this berm is needed to build the foundation of the stadium, since the water table is so high in the park. Flushing Meadows sits in a flood plane, which would make it costly to dig downward.

The league said the proposal from last year does not necessarily reflect its current plans, which may or may not include the berm, since since its vision is constantly evolving. A league spokeswoman reiterated that the stadium would not be taller than the Unisphere, even with the mound.

MLS is staying mum about many details of the project, which is what makes groups like the Fairness Coalition believe there are too many unanswered questions associated with the proposal to make it viable — such as who the owner would be and if the team will even make money, hardly a guarantee for an MLS franchise, according to Will Sweeney, who is involved with the coalition.

Sweeney described the group of civic organizations as pro-park but not necessarily anti-development.

Not necessarily anti-development? I guess this Fairness Coalition is one of those groups that makes deals to get certain groups funded in return for "community support" for alienation of parkland. As if these special interest groups are an actual representation of people in the community. Don't be fooled by another form of tweeding.
Posted by Queens Crapper at 7:02 AM

How is it a private corporation can stay "mum" on any details of a project which allows them a virtual gift of public land? Speak now my elected officials or pay at the poll.

How is it that CB#7 voted in favor
of the original USTA intrusion on FMCP?

Answer--
IT'S RIDDLED WITH CORRUPTION!

There's always someone willing to sell out their own community. Money talks.

Not one public official is commenting; what gives?

They're silent because they've all been bought!

The only guys who haven't and any be bought are Loscalzo and Centola. Look at that video! Look at all Loscalzo has done to show the truth with the Willets point deal. Look at everything Centola has highlighted in his community.
These guys should seriously be elected to office.

I've read a lot about writing in Al Centola on this blog and others I say go for it, lets vote him in. I haven't seen anything about Loscalzo, but why not? At least they are honest.

Nothing new here. They built the meadowlands stadiums on a "river" hence the nickname "the swamp"