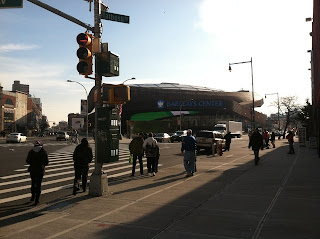 Mayor Michael Bloomberg listed the Barclays Center's economic impact at the top of his administration's achievements in his State of the City speech Thursday, but most jobs at the new arena are part-time and don't come with benefits, arena officials said recently.

Bloomberg highlighted the 2,000 permanent jobs created by the new arena in his final State of the City address, which was delivered at the Barclays Center. The mayor noted that some 30 percent of Barclays Center employees are, like part owner Jay-Z once was, residents of public housing.

All told, 75 percent of the arena's employees are Brooklynites, Bloomberg said.

But of the 2,000 positions, only 100 are full-time jobs. The rest are part-time positions that don't offer health insurance, said Forest City Ratner Companies spokeswoman Ashley Cotton at a recent public meeting about the arena's impact on the surrounding area.

Gib Veconi of the neighborhood advocacy group Brooklyn Speaks said that while the jobs are a welcome change for unemployed Brooklynites, the number and quality of jobs at the Barclays Center don't measure up to what was originally promised, and pale in comparison to the amount of public subsidies the arena received.

The city's Independent Budget Office has calculated that the arena received about $750 million in direct and indirect taxpayer-funded subsidies, Veconi said.

"If you divide that by 2,000 jobs, that's $375,000 a job," Veconi said. "When you look at it in that light, does that seem like it measures up to what the public put into the project? No. You would hope that we created permanent full-time jobs that could support a family for $375,000 of the public's money."

Barclays also laid off a boatload of people recently, with another wave of layoffs coming.

So why should we trust the jobs claims of those pushing stadiums and shopping malls in Flushing Meadows knowing this info about the huge arena that was built in Brooklyn? McJobs are McJobs.
Posted by Queens Crapper at 12:42 AM

I can't think of a bigger lie from a poitician's mouth than, "this project will bring thousands of jobs/affordable housing to the community".

how many will be unemployed at TIME INC. when they sell 35 of their 39 magazines ,shortly ?

have the chickens come home to roost at the shadow,progressive government ?

Is anyone out there surprised that Bloomberg & Co. lied about "job creation"?

Not me! Everything "good" he promised NYC, he
hasn't delivered.

NOW--
you voters better WATCH OUT for Christine Quinn.
If elected she will fulfill Emperor Mike's legacy and finish the ruination of a great city.

Then she'll move on to a fat job--quite possibly as a lobbyist.

Oops, I misspelled my own name.

Everything mentioned here wont matter when the meteor hits.

Barclays is merely the bank which bought the naming rights. It probably was contemplating entering the retail banking market in the United States where a little name recognition would help. Barclays had a scandal, changed CEOs, and it is radically shrinking its US (and New York) footprint in investment banking. They must be shopping those naming rights around now that they don't need them.

It would not be a surprise to see in the not too distant future that Barclays Center has a new name.

Such suckers we are, when pols tells us Walmart is evil but Bruce Rattner & JayZ are the cat's meow?

None of this should be a surprise. All of the jobs being created in this city are either in construction or part-time positions. This is the new normal. Why would employers want to hire full-timers and face the higher costs associated with them?

At least there are some people who will be taking less from welfare now that they have some income coming in. Let's face it, these part-time jobs are being filled by the dropouts and the chronically underemployed.

"At least there are some people who will be taking less from welfare now that they have some income coming in."

Let's see, even with these jobs they will probably still qualify for public housing, food stamps, and medicaid. And their poor paying jobs are essentially subsidized by our tax dollars that were used to develop the arena.

Yet there are many who still insist that unions are the problem.

They are laying all the regular people off to pay for the unions running and servicing the Barclays Center.
Stadiums, theaters & arenas in NYC have been mobbed up with "father & son" unions forever. No more should ever be built in this city.

To add thanks to Obamacare it looks like 1/2 the whole country is going to be forced into part time work.
That loophole to beat paying employees Obamacare is the only way most company's can afford to stay in business.

Our government has sold our country down the river all for the sake of getting a Hispanic vote. It's all BS
No other government in the world would have turned a blind eye to this problem over the last 40 years.. Endangering it's own security.

Many people are fooled by business saying that obamacare is the reason they are not hiring full time workers or offering insurance but that is a lie. The reason we have obamacare in the first place is because we were having a health care crisis in this country were the majority of working people were uninsured. So businesses were not offering insurance before obamacare.

The best protection working people have is a union

The meteor is gone, by George.
You see...it it hit a former Das Kapital nation
not a capitalistic USA.

then why is union membership declining drastically in the U.S.?

the best way for over paid union officials to scam their membership's dues and bribe the public political contract negotiators, is to force strikes during a depression .

over 23 million citizens unemployed and underemployed.