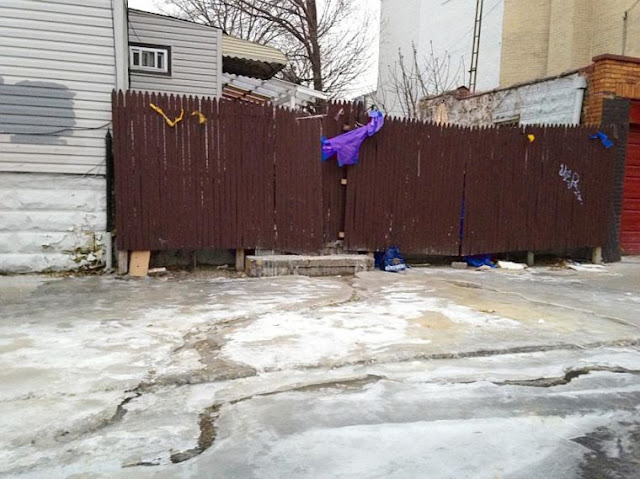 The home at 80-87 88 Ave. in Woodhaven has been leaking raw sewage from a broken pipe on the side of the house for months and the problem appears to have only exacerbated. Now, the sewage has frozen into a dangerous sheet of yellow and brown ice along the sidewalk and in the street.

Ed Wendell, president of the Woodhaven Residents’ Block Association, said the home has been a problem for a while.

“It’s pretty disgusting,” he said. “It’s a real quality-of-life issue for the neighborhood.”

Outside the home, the sidewalk on 85th Street was covered with a sheet of ice for over a week. The leaking raw sewage freezes at night and, since the location of the leak along the side on the house on 85th Street is such that there’s little direct sunlight, stays frozen for most of the day.

The foot or so of snow that fell on the neighborhood last week didn’t help at all. Piles of shoveled snow in the street created a dam of sorts that backs up the leaking sewage onto the sidewalk.

The house itself doesn’t appear to be in any organized condition. On its front porch, children’s toys sit stacked and lined up. Rugs and clothing are strewn across the back fence.

The home is owned by Noris Requena. A phone number registered to Requena at an address in South Richmond Hill is out of service and no one answered knocks on the door Tuesday morning.

A reader who sent this link to me said the response he got from DEP was:

The Department of Environmental Protection investigated this complaint and determined that no repair is needed.

DOB failed to investigate either of the complaints filed this year.

Be glad it's February and not August...

Reminds me of south Los Angeles Ca where you have a "family" of 30+ Mexicans living in 1 family building.
They drop pumps in the cespools to pump raw septic out to the street or behind the rear yards.

Some of these small old 1920s houses in Woodhaven have cesspools, that may be whats going on.

Jamaica is not the only dump in Queens (although the worse) and this trend seems to be spreading and getting worse. Of course the culprits are the pigs that live here, but the bigger issue are the political leaders and city officials who seem to be doing very little to address this issue through changing of laws, enforcing the laws we have and having a zero tolerance for this, pardon the pun, SHIT. This house deserves media attention, be it Help Me Howard, Greg Mocker, the WPIX crew or NY1.

Look at you! Making the pols job difficult!

You actually mean they have to work ... rather than line up the people you are criticizing on a banner front page heading about their care for them (and conversely thumbing their nose at you?) ... in a vote grabbing effort?

Remember, the pols don't want you or your type.

Immigrants water the roots of the Democratic Party. Its all about Tweeding.

Give them free soup and you get their vote while they don't look too close at what you do.

Wow, I can't believe someone here hasn't made a snarky comment about the homeowner's race yet. Slow weekend.

the owners are trying to destroy the property so at NYC's expense it will be torn down. just another way illegal immigrants work our system. Then they can sell to real estate developers happy to build McMansions of unregulated/Multiple Dwellings. "fair market housing". easier to scam tenants. Property owners get tax breaks, no mention of the unsanitary conditions and destruction of neighborhood community.