Since they're doing it anyway... 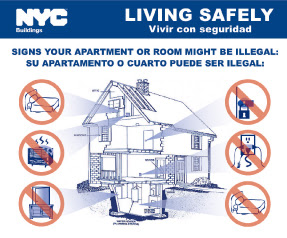 ...facing similar shortages of affordable housing, several other cities, including Santa Cruz, Calif., and Orlando, Fla., in recent years have moved to modify their building, housing and zoning codes to legalize a greater number of such [illegal] dwellings. A number of states have also passed laws that address the issue. In New York, it's an effort that has long been championed by the Immigrant Housing Collaborative, a Manhattan-based coalition of housing groups. More recently, Manhattan Borough President Scott Stringer endorsed the concept.

A report released by Mr. Stringer's office in December predicted that such changes would bring these dwellings "out of the shadows." Doing so, the report concluded, would add tens of thousands of affordable units to the city's legal housing stock and would spur economic growth by accommodating more young workers.

But some people insist that merely making more ADUs legal would actually accomplish little. Mary Ann Tighe, chief executive of the New York tristate region for real estate services giant CBRE, pointed out that the effect on the supply of housing would be limited.

"Legalizing [dwellings] alone will not materially increase the housing stock since these illegal units are already occupied," Ms. Tighe said. As an alternative, she suggested that converting buildings in manufacturing districts to residential use would have a greater effect. "The city has embarked on rezoning these areas, but there are still more that are underutilized," she said.

Many others agree that any moves to legalize more units must be done on a case-by-case basis, and that some of the apartments are simply unsuitable. Meanwhile, Mr. Stringer's backing for such proposed legalizations marks an important step, but any such measure would have to be approved by the City Council, where support is uncertain.

Jumaane Williams, a Brooklyn councilman who sits on the Housing and Buildings Committee, supported the idea but assayed its chances of becoming law as hazy at best.
"I've been doing this long enough to know that sometimes being right is not enough," Mr. Williams said.

Nonetheless, Jerilyn Perine, executive director of the Citizens Housing and Planning Council and the city's former housing commissioner, insisted that something must be done. "This is ... about accepting the reality that this is how people are living, and about creating a path to legalization, so we are improving the quality of life and safety," she said.

So are you going to then rezone the entire city again to reflect the illegal units that are now legal? How are you going to get homeowners to fess up that they have illegal conversions in their homes when they are getting tax-free income now? If everyone in an area now has a right to house someone in their basement, what will happen with schools, sewers, sanitation?

The problems is that those educational institutions as well as those community preservation groups that fully are aware of this are complicit in this outrage.

But it ensures that there is a healthy crop of Tweeded ready to water the roots of the Democratic Party and a strong army of desperate poor ready to undercut the middle class in competition for jobs and resources.

the politicos who support this idea are the same ones out screaming at ConEd everytime there's a power outage. They just don't get that more housing puts more of a strain on an already overloaded infrastructure. Brainless!

In lieu of a functioning DOB we get this instead.

Let's legalize marijuana, while we're at it, and all have a good smoke.

I'd walk a mile for a well rolled blunt!