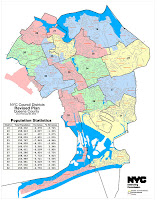 Queens activists and civic associations were upset and dumbfounded about two specific areas Tuesday when the commission released its final draft of the new lines ahead of the vote.

Just north of downtown Flushing lies the border between areas represented by Councilmen Peter Koo (D-Flushing) and Dan Halloran (R-Whitestone). The Northeast Flushing Civic Association, the Broadway-Flushing Homeowners Association and the Queens Civic Congress, along with Koo and Halloran, had united over a plan to fairly divide the two districts along neighborhood lines, keeping low-density housing in Halloran’s domain and high density housing in Koo’s.

The coalition formed in response to a draft map released by the commission that put some high density co-ops into Halloran’s district and a section of single-family homes into Koo’s. The ensuing outrage was so great that the executive director of the commission made a motion to correct what he called a mistake, and stuck the co-ops back in Koo’s district.

But the final maps did not follow the coalition’s recommendations and drew a significant chunk of low-density blocks in north Flushing into Koo’s district, a move that had not been reflected in any of the commission’s previous drafts.

Halloran called the lines a compromise, noting that Broadway, Flushing and Auburndale were largely kept together in his district.

But Paul Graziano, an urban planner who lives in North Flushing, used software on the commission’s website to show the lines could have easily followed the lawmakers’ suggestion while making sure the districts had the correct populations.

The final map is here: Queens
Posted by Queens Crapper at 6:50 AM

Divide and conquer!
North Flushing will be doomed ...

How envious you must be of our leafy green nabe.

YOUR ASTORIA-LIC NABE HAS BEEN COOKED FOR 20 YEARS...it's way past time to move, you sputtering malcontent!

Vallone Paul that is was trying to pretend he belonged to a group he didn't and never showed at the final meeting.

Halloran and Padavan knew what the community wanted and needed but screwed them anyway.

Halloran or Vallone? Fucked either way.
Shafran is a park side hack as is Silverstein
If only there was another candidate out there
Someone honest and involved in the community
As Vallone said someone with an Italian last name
Or not who cares
We need an honest rep

Do we write Al in? Or will someone else step up?

Please oh please someone SAVE US!


I know this thread is old, but maybe someone can comment on my question below pertaining to zones as I find it appalling.

I live in one of those "high density coops" under koo's council district 20 zone, but my kids go to the school they are zoned for (elementary ps 21 and junior high 185) that are about 4 blocks from our coop in council district 19 - vallone's zone.

I just got a general mailing from mr koo, where he credits himself with acquiring funding and upgrades to "every public school in his district". Needless to say, my kids schools are not listed as receiving any benefits as they are technically not in koo's district,

Question: Is this very common in NYC? Perhaps silly me, but I had thought most of these zone lines had some symetry.

I find it rather upsetting that im voting for my district elected official as per one set of zone lines, but my schools aren't within the same district zone he oversees!
It would be a different matter if I elected to send my child to an out of zone school, but this is not the case.
It would also be a different matter if the district council had nothing to do with schools and their funds, but they do.

In this case mr koo got funding for air conditioning, technology upgrades, playgrounds, electrical work, auditorium upgrades, and rennovations in his district's schools. Contributed nothing to my schools per his mailing.

Also needless to say, I do not receive mailings from district 19 / valine, to see what he is doing for his (my zoned) public schools, as I am not residing in his district!