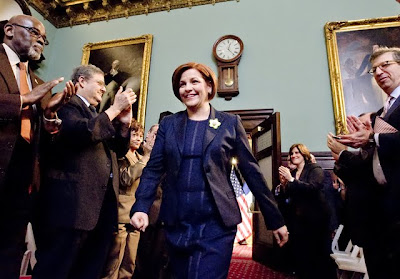 City Council Speaker Christine Quinn vowed to build 40,000 affordable, middle-class apartments over the next 10 years during her final State of the City speech as speaker Monday.

Quinn, who is widely expected to officially launch her bid for mayor soon, described the initiative — which was one of a series designed to bolster the city's middle class — as “the biggest commitment to middle class affordability that this city has seen in two generations."

“We face an affordability crisis in our city,” Quinn told the audience gathered in the City Council chambers. “We need to make sure that the people who want to stay in our great city can afford to stay.”

Quinn said she would pay for the effort through a combination of government efficiencies and more debt, arguing that borrowing was "the right move at the right time" because of record-low interest rates.

“This is a once-in-a-lifetime opportunity to invest in our middle class,” she said.

Who pushed through the rezonings that caused the City to become even more unaffordable to the middle class?

You did. Didya think we forgot about that?
Posted by Queens Crapper at 12:35 AM

who does she think she is, NANCY PELOSI ("we have to pass obamacare first , to know what's in the bill") ?

Look the real culprit was the 1997 Rent Stabilization fraud.

Once the lid came off those units, THAT was the final straw for many working class NY'ers.

All the rest of this b.s. about "affordable housing" is just trying to make up for the loss of over 300,000 TRULY affordable units.

Broderick Crawford in a cheap wig.

"Who pushed through the rezonings that caused the City to become even more unaffordable to the middle class?

Didya think we forgot about that?"

YES, SHE THINKS YOU FORGOT ABOUT THAT. Thats her game plan.

"YOU" people will vote for her and she knows it, in spite of her actions.

40,000 affordable units? A drop in the bucket, considering that NYCHA alone has about 260,000 low-income housing eligible people on their waiting lists. There are still considerable tracts of underdeveloped land in various parts of the city used exclusively for single-story warehouses, and long-term parking. Zoning laws are going to have to be re-examined sooner or later, so why are we wasting tax payer money on interest payments when we begin addressing the problem seriously for free?

Also in the article, Quinn wants to give out $13 million for undocumented workers to get GEDs in order to make them job-competitive. News flash - they are already job-competitive. That's why they take on the risks and hardship to come here. Which campaign contributor is she planning to grease with THAT contract?

Whatever happened to individual responsibility?

Cut back on illegal immigrants and you would have 400,000 apartments open without spending a penny.

what share of nyc taxes go to pay for the obama free cell phone plan ,which is now reportedly up to $2.2 BILLION ?

Affordable for whom? Usually when "affordable" housing is offered, the income guidelines are around $50k /yr for a family of 4.
The illegals still won't be able to afford it, and the people who fit the income guidlelines are not middle class, they are POOR.

"...the income guidlelines are not middle class, they are POOR."

Wait for it. In a decade or so all those who live in public housing or who are on welfare or get food stamps or have their kids get free meals or get health care via the government or get social security will have their pay checks confiscated by the government and the government will take their share and then issue credits onto a debit card which the poor will use for purchases at all stores that the government deems acceptable.
In other words no beer, alcohol, cigarettes, junk food, fatty food, etc, etc.
Hello to the future of a total nanny state!

you said it. The guy on the right is Bill Rudin. Oh irony.

There will be plenty more morons voting for her!

Keep on being stupid folks.

Vote for your own downfall! Vote for Quinn.

You mix in low income housing in or next to expensive condos. The predators have built in prey and the libs can't understand why they are hated and despised.........