Public says no to parkland grab 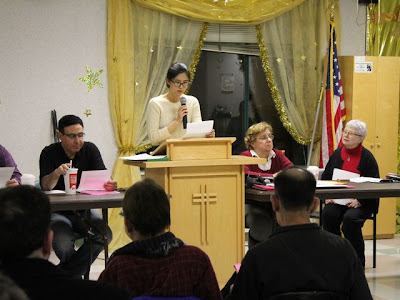 Activists and residents called a proposed $500 million U.S. Tennis Association expansion in Flushing Meadows-Corona Park a “land grab” during a meeting Monday night in an attempt to sway the community board's parks committee, which is considering the issue later this week.

“They already have a huge chunk of land and now they want more,” John Kelly, a retired Flushing resident, said at Monday's meeting. “Do you think they would try to commercially develop Central Park or Prospect Park? I think not."

Another Queens resident, Ben Haber, accused the USTA of not being a good neighbor.

"There is no justification for the USTA's request other than they want to make more money, the bulk of which goes into the pockets of the professional players and its commitments throughout the United States — not Queens," he said. “Your obligation is to protect the park not just for the current residents of Queens, but for generations as yet unborn.”

A statement from state Sen. Tony Avella, who strongly opposes the USTA expansion, was also read at the meeting.

“In my opinion, this is perhaps the biggest land grab of parkland not only in Queens, but also in the entire city,” the statement read. “Parkland is sacred. The three projects will result in elimination of crucial parkland from our borough’s most prominent park, which provides open space and recreational benefits to thousands of borough residents."

Edwin Westley from Community Board 3, which includes Jackson Heights, East Elmhurst and North Corona, said he believed more than 400 mature trees would be chopped down - citing an environmental study - and that the project would significantly increase transportation problems in the area.

“I would urge you to vote 'no',” he told CB7 members. “I know my Community Board is going to vote 'no' on this proposition.”

Being caught totally off guard, the USTA and City made sure to pack the CB9 meeting the following night with union members and tennis players. When you were 13 years old, did you even know what a community board was?
Posted by Queens Crapper at 12:37 AM

Last night, at the Community Board 9 meeting, a rep from the USTA and another (from the parks dept.? I was in the back, did not catch the name) droned on for almost an hour total about the project, and at one point said that the loss of 400 trees was inaccurate, because many of them would be "transplanted" elsewhere, not removed. What a relief. Also admitted was the fact that there is no set formula for how private developers need to compensate the city for lost parkland.

Several speakers, from athletic directors to facility employees to construction unions to budding middle school tennis champs, all probably encouraged and informed about the meeting by the USTA in the first place, were there to cheer on the move.

Karen Koslowitz showed up just long enough to make a few repetitively needless remarks, name-dropping her role as chairman of the Council's Committee on Economic Development, as if that mattered, let alone being a troubling conflict of interest.

Every argument made rested on the belief that bending the laws for a land grab is okay if you can demonstrate a strong enough economic impact and give away enough scraps from the feast to the surrounding community. Honestly, I'd respect these people a little more if they'd just come out and say, "we'll take as much of your park as we can get to make a profit, and we're going to turn on our PR engine full blast to get it - stop us if you can."

Parkland should be sacrosanct against private development - full stop.

Judging from the crucifix on the podium, this "state" meeting was held in a church property. But when activities of worship are held in a public place, i.e. a school, that's unacceptable.
And for the record, I am reverent, though not religious. I just want to get the hypocrisy straight.

CB7 supported the first USTA parkland grab when then Mayor Dinkins proposed it.

It was held at the Union Plaza Care Center, which is a non-denominational nursing home. That podium is used for their religious services, which all nursing homes are required to hold.

how about making a deal?

For every acre of parkland that is taken by the USTA, another $20 million dollars of funding must be given to restore and maintain the NYS Pavilion.

As was stated elsewhere in this blog by a very astute commenter, transplanting the trees is not a simple process because of the incorrigible, ashy soil in the park.

The Arthur Ashe Stadium expansion during the Dinkins administration resulted in the creation of Powells Cove Park. It's one of the finest waterfront parks in Queens. Clean, relatively undisturbed, a natural wetland preserved.

That style of cross is quite fitting for the circumstances.
It's a double cross.

Not exactly. Lack of maintenance at Powell's Cove Park

Hey this is New York. If they want more parking, build parking garages and stick the courts on top.

They can YELL all the "NO" they want.
Community Bored #7's "toy government" vote is purely advisory!

Yeah,
TOY GOVERNMENT AND TIN DEMAGOGUES is why Queens has been getting screwed!

ONLY YOU, THE VOTERS, HAVE THE POWER TO DISPOSE OF THE RANCID PSEUDO REPRESENTATION YOU'VE BEEN WILLING TO ACCEPT--OVER AND OVER AND OVER AGAIN!

Why doesnt someone propose this for central park? The economic benefits will be far greater in the middle of manhattan. Leave queens parks alone.

Meetings in churches ? And this meeting does what ?
The Bloomberg mob is gonna stick right up there ass anyway !!
These working class stiffs and home owners (mostly Democrats)lost there voice in the process the day they
re-elected and seated criminals.

These people need to raise some "sensational hell" (the news media love) to get the national attention and support they need. ..100's of angry people at the mayors condo with cardboard pitchforks and fists (keep it legal would be a good start.

The mayor and his friends get real extremely upset when the TV cameras capture and start to investigate stuff like this.
Now how many can grow some balls like citizens in the old days ?

Those of you in Queens who care; dont trust this advisory vote, get in touch with you local elected reps and organize if you are not already. This fight is just beginning!

They don't maintain what they have!Defective perimeter lighting and no flags on empty flag poles...........

No shit Sherlock !!
The sad thing is these people do trust votes, "diplomacy” and local politicians !!
The mayor, his bastards and international USTA are going to yank, bankrupt, chomp on them folks then use them as toilet paper.
Big global untraceable payola $$$ and free final game "accommodations" talk big.
Tennis is a clubhouse sport "f_ck them little people" as they say up in the club !!

Question is are the "little people" willing put down the TV remotes, ballgames, beer, grow some balls and really put on a good wild game. (and I don't mean playing cards with sharks or useless board games)