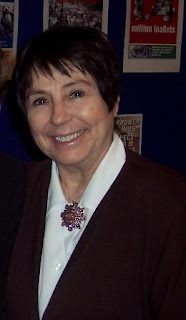 “This was a no brainer,” said City Clerk Michael McSweeny. “She’s very qualified for the position and has decades of service for the people of Queens.”

She began her political career when she was elected to serve as the Queens County Budget Negotiator, and later in the City Council in 2001 where she served two terms. Her new office will be in Borough Hall in Kew Gardens.

According to their website, City Clerk is one of the oldest offices in New York City government" fitting since Helen Sears is one of the oldest people in New York City government. 82-year old Sears was defeated by Daniel Dromm in 2009. Seems like the Queens Machine is making Borough Hall a retirement home for "Senior Tweeders".

Another double-dipper?
Posted by Queens Crapper at 12:39 AM

LOL....
I think that Queens (aptly named in this case) has to get with the program.

Wadda ya think of installing a Liberace Wedding Chapel at Boro Hall, (for guys) and a Thelma & Louise Chapel (for girls) BP Marshall?

Everybody can get their marriage licenses at the retired #7 "red bird" car out front.

Why not encourage gay tourism in Queens....Terri Osborne?

P.S.
And Sears can get a doctor of divinity degree and perform the services!

Because the people of Queens are turned off, bought off, and have their minds off.

Take a look at the let mindless losers run the local civic scene, does anyone listen to them?

Or do they exist whose sole purpose is to trip up or drown out those that are actually trying to do something?

Why don't all these old fart politicians retire? Let's get some younger blood in and change things up. She's 82 years old. Guess there's too much money to be made off the backs of the taxpayers for these geezers to retire.

cant we just name the throgs neck bridge after this lady instead, it worked for koch

the majority has been infiltrated by homo/bribed politicians and judges.

Yawn. This is about the fourth time that you've said something like this over the weekend, Gramps.

Let us know when you have something new to say.

Throw out Helen Marshall and vote for real change, people.

"Nobody willingly gives up power.
They have to be removed from it"!

Now who was it that said that (or something like it)?

Queens' voters need some Viagra to restore their voting power so that sluggish pretenders like these get dumped at the polls!