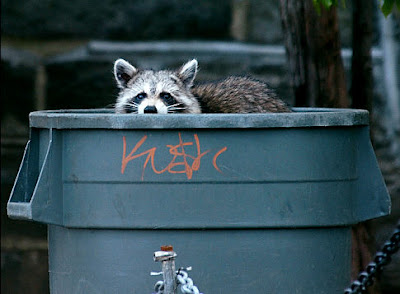 A trio of legislators frustrated with the city's response to increasing complaints about raccoons is hoping a change in law will do the trick.

State Sen. Tony Avella submitted a bill Monday that would force the city to pick up raccoons at the request of the public. It mirrors a city bill introduced last year by City Councilwoman Elizabeth Crowley.

And Assemblyman Andrew Hevesi successfully pushed through a bill recently that helps clarify the way raccoons are classified, making it easier to transport them under state law.

The city now only picks up raccoons that are considered dangerous, sick or hurt.

The bills submitted by Avella and Crowley also provide for humane relocation whenever possible. Because of rabies fears and logistics, many trapped raccoons are euthanized instead of released.

Wildlife experts have encouraged city residents to seal trash cans and crawlspaces so that raccoons find other places to call home.

How about sending DSNY after the slobs that leave food out which attracts the raccoons? That way we can do something that actually may help to solve the problem and make money for the city. These creatures were here before us, they generally peacefully co-exist with us and trapping and relocating them is expensive and will just shift the problem elsewhere. People throwing chicken bones in their front yards, leaving out cans of cat food, etc...they are the real problem.
Posted by Queens Crapper at 12:04 AM

To be fair, raccoons didn't start settling in urban Manhattan until the 1950s.

We had to pay a trapper to remove racoons from our property. They were running over the roof night after night; knocking down garbage cans and making a mess night and night, and they tend to destroy yard furniture and whatever else they can manage to get their paws on.

It is expensive and they just keep coming and coming. There seems to be no end. They are cute but they are truly a nuisance. They are even seen during the day in large numbers I am told by one homeowner. Thank you to the politicians that care.

We have had such animals here forever. Rabbits and oppossums, too. It's you car-hating transit-huggers we need to trap and ship back to your urban sewer once we liberate Queens.

I rather see raccoons than most of the slobs landlords in the city who do the bare minimum in securing the trash.

If they have nothing to eat, they'll not settle into an area. It's as simple as that.

What's a coon done you urbworms? Chased the rats you love to live with? Phony Fella should stop riding so many press busses.

The people who spread bags of bird seed all over the place are the ones who need to get a life.

Leave the Racoons alone, they've been here in Queens forever!