Another Queens hospital to close 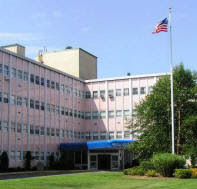 New York City is about to lose another financially troubled hospital. Sources say Peninsula Hospital Center, one of two hospitals serving Far Rockaway, Queens, is set to close 90 days after state officials confirm a closure plan for the 200-bed hospital. Some 1,000 workers would lose their jobs if the plan goes forward.

Spokesmen from the state Department of Health and MediSys were not immediately available for comment.

Hospitals in Brooklyn and Queens are among the most financially strained in the city, largely because they serve poorer communities and rely heavily on Medicaid for revenue.

Alas,
Rockaway seems to have become the forgotten land.

Rockaway vies with Staten Island for that title - we have NO city hospitals. Of the two privates, one, a NJ-based operation, is in deep fiscal trouble.

At the risk of being called a "socialist" this here's one of the biggest arguments for getting rid of for-profit healthcare.

In other words, immigration is hurting the city. What else is new?

"Life, liberty and the pursuit of happiness" are our fundamentals.

Without good medical care available to ALL....we might individually lose our "life" provision.

In other words we could die!

It's about time that the medical/pharmaceutical complex stopped ransoming us with their "pay up or die" attitude.

Deport all the illegals and this subject will become a non-issue. Illegals are bleeding us dry and that's one of the many reasons why the boroughs are in such dire financial straits.

After dishing out service they are only repaid 8 cents on the dollar. How the hell is a business suppose to survive on that? Here's the future headline for Brookdale and other hospitals. Going out of business

Those unions.
they would rather have 1000 of their members lose jobs than forgive what the hospital owes them.
Pathetic.
This will be a great loss to the community.
This is just the beginning of a domino effect of obamacare.

who cares about rockaway, they kill each other as it is, anyone want to buy a condo

AS QUEENS WEST GETS ANOTHER 17 LUXURY HIGH RISES AND A MULTI-MILLION DOLLAR "DESIGNER" LIBRARY THAT NO ONE CAN AFFORD TO LIVE IN AND GO TO.

GET THESE MOTHERFUCKING PIGS OUT OF OFFICE

Still no word from Turner, Weprin, Goldfeder, Deacy, or any other candidate running in the Rockaways on how to save this hospital.

They're hiding their heads in the sand and still expecting us to elect them.

"This is just the beginning of a domino effect of obamacare."

THAT is the dumbest remark so-far.

If you want a political angle, it is the final death throes of our sick for-profit medical system.

Except that hospitals in the city are not-for-profit.

"Anonymous said...
Except that hospitals in the city are not-for-profit."

Except that our total system is based on fee-for-service and that, along with exorbitant insurance for both doctors and patients, is bankrupting us.

The current system can not last. These closings are the first signs.

If there ever was a major catastrophe at JFK airport,
Jamaica hospital would be the closest, 15 miles away....

To all the anonymous posters going on about for profit health care:

Socialized medicine in the guise of medicare IS whats bankrupting the hospitals. And medicare is going bankrupt itself.

Are you under the delusion that some magical government health care elves will take care of the costs so nobody has to pay anything?

Get your heads out of you asses!

And no, your idea doesn't make you sound like a socialist, it makes you look retarded. With voters like you, it's no wonder this city is as fucked up as it is.