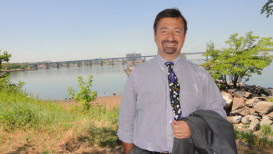 Iannece, a Bayside Democrat who previously ran for City Council in 2001 and 2009, said he has been approached by Queens Democratic leaders about making a run for the assembly seat.
Posted by Queens Crapper at 12:26 AM

This goofy goombah is a 3 time loser who's finally awakened from his snooze!

The city doesn't want him
so he thinks Albany might?

These career wannabees just keep on plugging for whatever office they can find.

Wattsa matta Jerry....
being a legal mouthpiece ain't enough for you?

The river of mediocrity....
carrying a few opportunistic crooks along in its current....
continues to flow through our political system.

Well, at least Iannece will be out of our hair in NYC.

jerry is the man, this sho8uld have happened a long time ago for him, forget the weprins, jerry has my vote

Sounds like he'll fit in perfectly with the clowns in Albany.

that douche bag has lost four times before. he will never win especially with that bad toupee. he is an arrogant bastard. enough of him already.

Jerry had better get a better hairpiece before he runs.

Which mob family are you or he in cahoots with?

What a chooch he is!

Maybe you want to know a little more about Jerry's father's "business" before you vote for Jerry!

"Mind you, I don't really care what a man does for business as long as it doesn't interfere with mine".

I guess we're looking at Vallone for the next Councilman!

ask not what you can do for your country

ask what you can do for evan staviskys client book

Why can't Northeast Queens elect a Democrat who isn't in the pocket of lobbyists like Stavisky, Meara or Vallone.

Jerry, you should primary for the council seat and screw Vallone the way he screwed you.. Why is it that he needs to be tied to organized crime because of his heritage?

I'd prefer any Vallone for any office any day over some of the yahoos that might be running.

Look at "daddy" Pete Sr.
the section of Astoria he lives in looks great.

The rest of it, where he doesn't, looks like crap!

There's always a trade off in politics.

i.e.
Despite any of Paul Vallone's perceived shortcomings....I'd vote for the candidate who can get things done for me!

Since Paul Vallone lives about 4 blocks from me....he's got my vote to protect both of our mutual nabes and the connections to get results.

Poor Avella couldn't get shit for us when he was our councilman because he made too many enemies in city government.

So the NYC political machine made mince meat out of him....making sure that no bill he proposed ever got passed!

Oh....you could always count on him trying to do the right thing by arranging a marathon of press conferences.

But whatever came of it?

Not enough to really matter.

Am I cynical?
Nope....just extremely practical!

with jerry out of way vallone will get nod

everyone in the 19th district who knows matt will never forget the
creepy, lowlife, ratt letter he wrote about halloran
yes matt your a real hero
thanks to evan you will never get a vote in whitestone
now go bitch to someone
maybe to the feds about evan and his pay to play rackets

with that weirdo creepy letter silverstein sent out about halloran

"jerry is the man" because he is successful, and point blank a really good person once you get to know him, his heart is i nthe right place for all new yorkers, what's with all the mob acusations every time someone with an italian last niame is successfull. you are just jealous that jerry will get the county nod, and will will, and by the way, i'm sure jerry does'nt kiss evan stavisky's ass, he just has no choice but to deal with him, and yes this also will clear the way for vallone to win the council seat and not have a split vote like last time. but the realy question is-what about steve behar, with jerry gone now he can become president of cb11

Typical, keep running for anything then they get their political pay off. Suffolk buries them in OTB for a pay off. Eventually they get on the State retirement list.

When jerry takes his oath does he mention that he will serve above all. Evans client list. Steve behar would restore integrity to cb 11

With Jerry out of the way, Al Centola should primary Vallone and or Halloran. Depending on his party affilition.

Or like I've read here as a Write in Candidate.

Go Al, and keep up the good work.

Al centola is the man

I have a problem my neighbor has 50 cats that stink up the block. Maybe al centola can help me with the health department. Nobody seems to care.

Let's see, you've got Dan "who cant" Halloran, or Paul "in their pocket" Vallone, who by the way uses CB7 looser Chuck Apelian as a campaign manager and chief of staff against Jerry "the wig" Ianecce. HELP!

That douche bag would just be another politician from Northeast Queens in office to make Rockland County resident Evan Stavisky money.

this is the deal barry grodanchik
or gennaro gets the nod.

Stavisky will throw the bald bastard under the bus and Jerry won't have the balls to run. Jerry Iananecce is done!!!