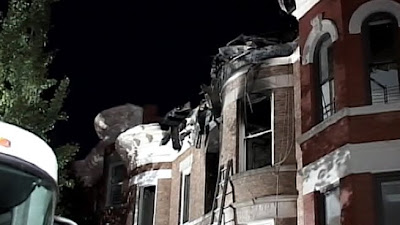 Fire marshals are investigating the cause of an overnight fire in the Bronx that has killed one person.

The fire broke out shortly before 2 a.m. in a three-story brownstone at 1991 Morris Avenue in the Mount Hope section of the Bronx. Over 25 fire units were called in to battle the two-alarm fire.

Other reports say the victim was a squatter. That's because the building was left open and unguarded. If DOB had responded to a complaint from July 4, this tragedy may have been averted. But it seems that DOB prefers to wait until a tragedy happens before it takes action.
Posted by Queens Crapper at 12:15 AM

I don' believe DOB has any authority to arrest or detain squatters-- or anybody for that matter. I suggest a call to the Police next time.

DOB has the right to inspect premises and call FDNY to vacate the building.

It's a tragedy only if someone other than the squatter was killed.