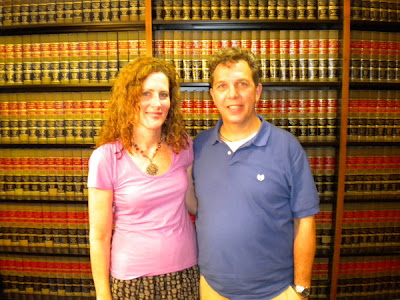 The Queens court system is getting crowded with Crowleys—so crowded that the borough’s top political dynasty is breaking rules meant to prevent nepotism.

Since then, records show Margaret Crowley’s sisters, Bernadette and Theresa, and their law firms have seen a spike in the number of cases they have been appointed to by Queens judges.

Those appointments violate rules that bar siblings of high-level court employees from winning case appointments in the same judicial district where that sibling works. Those rules were imposed nine years ago to prevent the rampant nepotism previously found in the state’s court system, especially in Queens.

After an inquiry by City Hall, a spokesman for the New York Unified Court System, David Bookstaver, said the Crowley sisters had improperly failed to remove themselves from a list of attorneys eligible for case appointments, and have now agreed not to receive cash for any future appointments.

Photo of Bernadette Crowley & husband from Bayside Patch
Posted by Queens Crapper at 12:25 AM

All in the family - For those who don't know this: How many siblings does Liz have 16 or 18?

The Crowley dynasty will soon crumble due to greed and genetic stupidity. Hey Joe, how's the heat wave in Virginia?

Only a bloodless (sorry, we don't endorse bloody) revolution by voters at the polls will change things.

You jerks keep these greedy crooks in power to enjoy their good lives.

While you struggle....they live large off of your taxes!

The Crowley dynasty will skip.

What judge will indict Joe....
one of his own?

You make me laugh 'til I fart!

what's the diffrence here, Weiner and piised off since he lost his seat, but it's ok for kosolwitz, gordenchick and the rest to secure and jerry ring election districts for themselves..

"The Crowley dynasty will skip."

Perhaps the Crowley's can take over Donovan's in Woodside and become restaurateurs like sleazy pizza Hiram did.

No way DA Brown will indict any County-connected pols.

Sorry. The Crowleys are above the law and will continue to break them to advance their greed. They will never be charged or indicted by anyone. Wonder how Joe and his family are doing in this heat wave in Virginia. He'll never feel the "heat" or wrath of the Queens voters. Queens folk are just too stupid.

The Crowleys have a finger in everything....from prosecutors to judges, etc.

We live in an oligarchy folks and it ain't gonna change....certainly not with Queens' brain dead voters.

So the dirty Crowleys will be right at home there!

Hey Joe, I remember another politician that used to say that.

You know what happened to him.

You cannot thumb your nose at the public forever.

Oh I'm betting I can.

The Crowleys: Never have so many done so little for so much.

They sicken me. Every single one of them

Under all the circumstances mentioned,
would a Federal investigation be warranted?