Hevesi to judge: "Please don't send my dad to prison." 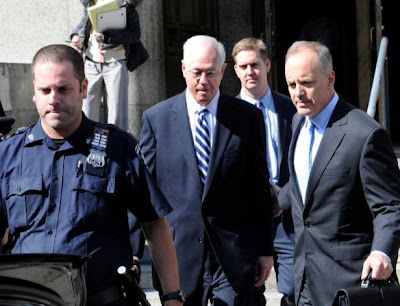 In a letter to [Judge] Stone, Assemblyman Andrew Hevesi passionately argues that his father's wrongdoing should not overshadow a lifetime in public service.

"In short, your honor, Alan Hevesi has earned the right to spend the rest of his life surrounded by those who appreciate and love him for who he is, a great and flawed man," Andrew Hevesi wrote. "Please send him home to our family."

The younger Hevesi wrote of modeling his life after his father, a former assemblyman and city and state controller. He portrayed his father as a fighter for his family, people in need, equality - and "what is right."

He even appeared to blame his father's plight on the scam's ringleader - the ex-controller's longtime political guru Hank Morris - by noting his dad is loyal, "sometimes to a fault."

"Despite his failures and mistakes, I will not now or ever stop believing in him," Hevesi wrote. "Not just because I love him as the man who, with my mom, raised, protected and loved me, but because these transgressions will never define my father."

Disgraced ex-controller Alan Hevesi was in a hospital for an emergency procedure today -- on what was supposed to be his sentencing day.

Facing up to four years in prison on a felony corruption charge for his role in a massive state pension fund pay-to-play scandal, Hevesi had to undergo an emergency endoscopy, defense lawyer Bradley Simon said.

Simon declined to get into the specifics of Hevesi's condition, saying it was a medical issue that popped up "over the weekend." (Ken Lovett says he understands the problem to be internal bleeding. - CK)

In other corruption news, Pedro Espada now faces more charges.
Posted by Queens Crapper at 12:23 AM

I'm still patiently waiting for my turn! Sheesh. What do ya gotta do to get noticed?

"Disgraced ex-controller Alan Hevesi was in the hospital again for another emergency procedure due to his uncontrollable shitting in his pants."

Lock the crooked bastard up and toss the key away.

This low life delivered the eulogy for another of his type...DONALD MANES!

We all should have known then that "the Donald" was senior Hevesi's role model!

Now let's purge the rest of the great Dem-pol-machine of some more bigger than life mega-sludge.

Then flush that scurvy Stavisky dynasty down the toilet!

Throw him in the pokey and let his roommate Bubba do the endoscopy!

After Alan gets sentenced...he'll be rolling over on some other big wig Democrats...most likely.

Have you all noticed that ever since Brian Mc Laughlin got his...there's been a steady stream of indictments handed down.

Brian must have sang some song.

When Moby eventually gets hers, she'll squeal too and more machine pols will tumble.

So on and so forth...right down the political food chain...they'll give each other up.

"The younger Hevesi wrote of modeling his life after his father"

Shalom in your home!

Andrew Hevesi should have argued:
"they didn't send Liu's father to jail, so why should they send my father?"

He belongs in jail. By the way, where is Captain Renault with his usual commentary?

Put him in jail with the face-slashing, wig-totin ho' bag. They'd make a nice couple.

Yeah, please don't send him to jail. Give him a free pass like you give to every other crooked politician, so he can fleece the public again. Politicians should be held to a higher standard because they represent the people. If all these crooked politicians knew that they'd serve time in prison, they might think twice before lining their pockets with our money.

....Andrew Hevesi, hmm. Is he the make-up wearing son or the cocaine snorting one? I get confused.

Assemblyman Andrew Hevesi is supposed to be an adult. He should act like one. Just like the rest of us, he should face that fact that his ole man is a lying, thieving, womanizing and corrupt piece of shit, who should serve time for the crimes he has committed.

Keep an eye on this Judge.

Is he the make-up wearing son or the cocaine snorting one? I get confused.

That's what I'm talkin' about. Momma's so proud! See? You said I was good for nuthin'.

What a low life. He got his sons jobs in the senate too. Has anyone investigated this? Throw him in with the rest of the criminals who were supposed to represent us in honest fashion. He must serve time. And cut off his 200k per year pension!

Politicians = criminals... ALL OF THEM

news reports say the sentencing judge has been replaced.

a new sentencing date in April. is the fix in ?

Jail time or not, take aways his pensions and other benefits. City and State pensions. He's a crook.

Shakespeare once noted in a play,
"First kill the lawyers".

Good idea Will but the politicians should come first.

However, since most of them are lawyers, you can kill two with one stone.

Hey junior Hevesi, line up for your 4 lines of coke!

Did dear friend Melinda also write a letter on his behalf?