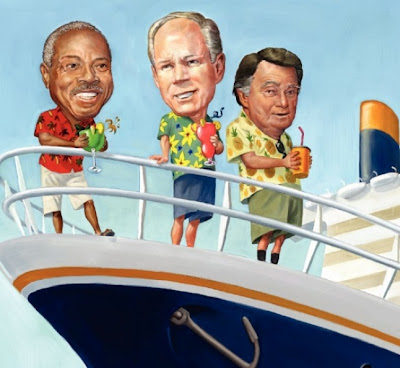 In the Bronx, the city's longest-serving district attorney, Robert Johnson, a 63-year-old Democrat, is reaching out to Republican and Conservative party leaders about running on their ballot lines. In Queens, District Attorney Richard Brown, 78, is hopeful that he too will again get the endorsements of all the major parties in a race in which no challengers have emerged. Even on Staten Island, which was the rare DA race to feature two candidates in the last election, the Democratic Party has yet to find a challenger to run against the incumbent, 54-year-old Dan Donovan.

So while the three incumbents are beginning the motions of running for re-election, the political questions are really mostly focused on whether Johnson and Brown are secretly plotting retirement while grooming hand-picked successors, who might be in position to succeed the prosecutors when they step down, and occasionally, on the thin but still swirling rumors about who might take on Donovan.

If Brown even comes close to Morgenthau's longevity, the field of potential successors will have to look elsewhere if they want to run for public office.

Council Member Peter Vallone, Jr., who has been subject to speculation about a DA run for years, said he is raising campaign funds, but would only consider running if the seat were vacant.

Another potential successor, former Council Member Melinda Katz, said she had not thought that far in advance.
Posted by Queens Crapper at 12:23 AM

Brown will continue to get Queens Dem. Party endorsement, as long as he does not go after Party hacks.

It's sad that there's no real opposition party. The Republicans are nothing more than partners (in crime)of the Democrats, fellow tweeders. Existing only to maintian the veneer of a democracy.
It's even more sad that most of us are ignorant of this or just go along with it.

In other words, his EGO is making his decisions, not his dedication to the job, the work that he does, or political need.

Queens has the best DA money can buy!!! Right, Gary?

DA Brown gives me an erection.

Crappy, do you think you can stay on target with stuff like that 50th Brithday party of Vallone where he asked donors to bring in as much as $3K a pop ... just because he turned 50?!?!?

Pity he wants only public money for the Steinway Mansion but can't ask a dime from his clubhouse cronies...and because of that its going to the dogs!

Crappy you are getting soft. Less traffic accidents and pets in crawspace and more of this juicy stuff.

We can get that shit on the evening news.

Guess you didn't read the comments on the Mayersohn post.

but why should we settle for a .300 batting average from you Crappy when we know you can can .600 if we turn up the heat.

when a political party in nyc can not take part in the democracy in government, it means that the majority of the electorate wants to exist under dictatorship.

"checks and balances" does not concern the thieves,as long as they get their entitlements.
because a candidate does not get elected,you can not accuse him of committing a political crime.

the same corrupt government they had in their former countries,that they will return to, after gaining the wealth from capitalism.

It's amazing how folks just vote for a candidate by default, the Queens DA seems be tough by all the press releases, but the DA's office is just a small piece of the pie, with all the crime and corruption going on
one has to wonder if the DA's office
made any much of a difference, crime has declined in new york city due to various factors but the DA takes credit, although it shouldn't. The ticket is now bipartisan, but folks just vote.

In addition it seems that taxpayer funds don't make a difference, less money is not always a great thing, but more money can make folks lazier, and devote time to ridiculous cases, or just throw money at staff who will dismiss cases anyway, the office claims they have more minor cases but since they are usually dismissed, it seems funding is just a way to keep folks on the taxpayer dime, profile cases always get mentioned in the da's press release, it makes you feel as if yeah,there is always great news in the release, new york city is doing great, really? It's seem Queens Crap.