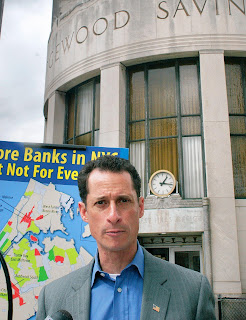 Low-income neighborhoods in the borough suffer from a lack of banks, and it is up to the federal government to coax more lending institutions into opening offices in underserved areas, U.S. Rep. Anthony Weiner (D-Forest Hills) said in Forest Hills Monday.

Weiner released a study claiming that the borough’s banks are concentrated in the wealthy neighborhoods and that the lack of banks in poorer areas deprives those residents of credit for small businesses and personal loans.

Yet since 2006, only one bank has been built in that neighborhood — which has a $39,000 median household income — bringing the grand total to one.

Banks generally open in areas where they can loan out money, Anthony. Last time they gave loans out to people who couldn't afford to pay them back, we ended up with a recession, housing bust and a lot of foreclosures.
Posted by Queens Crapper at 12:41 AM

This is an area for which Eric Gioia deserves great credit (along with childhood nutrition). He brought financial literacy programs into Western Queens public housing communities in partnership with local groups. He also coaxed Amalgamated Bank to set up shop.

A regulated, secure bank is a neighborhood cornerstone.

That's nice Erik, but banks don't make money off people putting away a few hundred here and there. And there are plenty of banks in neighborhoods like Harlem and the majority of people living there are doing so in poverty.

Weiner is a FLICKING idiot!

Over the next two years, we'll be hearing a lot of noise from Weiner and Liu, as they position themselves to succeed Bloomberg.

There's a need for places to get currency and make deposits and banks have been closing branches and moving people to ATM's. There's only a need for a place to open accounts, arrange for loans, etc. and that might as well be in a business district since most of the bank's customers will be located there. In any case, banks like any other business should be free to locate where they want to.

On the other hand, why doesn't Weiner address why hospitals have closed in Queens? I can schedule a meeting with a banker. I can't schedule my next heart attack and it would be nice to have a hospital in the poorer neighborhoods.

Not to mention, its not a good idea to put a pile of money in a place where it is likely to get stolen.

http://www.youtube.com/watch?v=dxz0MnQ6y7o
that pathetic goldsmith got to write his own oped piece in the new york daily news today telling us to tighten belts! How about a full refund for CityTime, flawed 911 system and DOE tech = 3 billion tax dollars consultants deep pocketed! Fire Bloomberg’s campaign staff and make him pay back tax payers!

Thank God Weiner's here to tell the banks what their executives missed when planning branches. I love the government so much! Banks don't know anything about money but Congress does!

Oh goody. When those banks fail, we can bail them out too.

Can someone clue this idiot in and explain to him that there are very few hospitals in Queens and that his constituents would love to have a local hospital to go to when they are sick and dying. Politians are concerned with banks because they are making money off the taxpayers and need a place to store it.

No problem Wiener can resign congress and go open Banks where ever he wants to.

In fact he can join John Liu and John Liu's bank robbing daddy and these three stooges can open a slew of banks together.

It's a free counrty, help yourself!

im not rich or anything but cant you do this online?

As far as not being partisan and emotional is concerned - you first.

Weiner is a media whore wannabe, having learned at the feet of Chuck Schumer. If it's Sunday, you know that Schumer will be holding a press conference about something ridiculous, just to guarantee that he's on all of the local news shows on Sunday night (since it's a slow news day) and gets a mention in all of the local Monday newspapers. Weiner is trying to emulate the master, but he's hasn't reached those highs - er, actually, lows - yet.

Why not? It works!

That's why he's hot doggin' it.

Mr Weiner. Please snap out of it. You have no clue what is going on in your own backyard. Ask any bank in your district why they don't participate in community programs, environmental projects, etc. Why didn't one local bank offer to help plant trees that were destroyed during the tornado?
It took a French bank and airline to do that. Where's the CRA? Hang it up already.

I'll be non-anonymous for this reply. For full disclosure, I have never worked for Citigroup.

A new financial empowerment center at the Queens Community House in Jackson Heights was inaugurated Friday ... funded with $250,000 through a public-private partnership with the Citi Foundation.

What IS it with these guys and banks?

Eric Gioia considered it an accomplishment that he was able to sign more people on to the federal food stamp program. He took Daily News reporters (and anyone else who would listen to him on local TV & radio news ) on shopping trips to local supermarkets. "Childhood nutrition" ? Any mother who's tried to stretch a dollar wouldn't buy half of the expensive items that he did. His housekeeper probably shopped for the food that fed Mr. Gioia's family.

An Anonymous commenter here pointed out what's obvious (to residents, not politician Weiner) that we need more Hospitals in Queens, not more banks!

What a bunch of ignoramuses. Not least of which is Krappy herself! Shame on you!

Baard is right. The issue is not about bank profits, it's about teaching good money management habits. If there's no bank nearby, you probably aren't going to open a savings account. If you don't open a savings account, you won't save for the future. If you don't save for the future and you experience a catastrophe, you're broke in no time and have no choice but to live off the taxpayers.

So allowing people in lower-income areas to learn how to save, to manage money, by giving them access to banks is actually smart for all of us.

1 - Meaningless statement. Unable to respond.
2 - Well, yeah. That's true. Who's to say they can't find a way of making those branches profitable? But hey, if you'd rather have hundreds of thousands on welfare, then just don't bitch about the status quo.
3 - What does adding a second S have anything to do with this? Are you saying we're not a nation of typo-ists? That at least is something positive.

That would be like putting up an all-you-can-eat-for-free bakery and locking the doors. why put banks in poor nabes that won't part with any money for the people who live there.

"So allowing people in lower-income areas to learn how to save, to manage money, by giving them access to banks is actually smart for all of us."

By giving them access to banks? Are you saying they never leave the ghetto? Because I can tell you that is a misconception. They travel around the city just as the rest of us do. So where they go, they can bank. I bank near where I work rather than in my own neighborhood because the bank I use does not have a branch near me. So having banks in your backyard doesn't mean you are going to use them.

"if you'd rather have hundreds of thousands on welfare, then just don't bitch about the status quo."

So if they put their money in the bank, they'll get off welfare? What kind of fantasyland are you in? People on welfare generally have been on it their entire lives and have no intention of coming off it.

Many of those same people make money off the books, and they would prefer to go to a check cashing place than a bank because the income can't be tracked that way.

Also, you assume that money management is tied to income level. We have council members with 6-figure salaries that are in foreclosure. Debt collectors go after people at all income levels, so knowing how to save is not tied to how much money you make. You sound like a limousine liberal who knows what's best for the rest of us when you really have no friggin clue. Another Bloomberg in training.

Finally, banks are in business to make money, not to teach people common sense.

"The issue is not about bank profits, it's about teaching good money management habits."

Isn't "teaching" a job for teachers and parents? Now banks have to teach people to manage money? Are you serious?

Really, it's not the bank's job to teach people good money management skills. The banks are there to make money. Not to teach people to save for tomorrow and not live for today. Why would anyone expect a for profit, private business to take on that role? And, anyway, I'm pretty sure most poor people already "get it." The problem is not that they are so stupid or ignorant as to not know that payday loans and living pay check to pay check (which then forces them to use check cashing places) are not good ideas. The problem is that they don't have enough money to live any other way. The presence of a bank in their nabe won't change that. If they have enough money to open and maintain a checking account, they can easily do so at a bank, even if it is not located right in their nabe. If they had the cushion to wait for the check to clear, they wouldn't need a check cashing place or a pay day loan.

Anyone who wants to can open up a savings account in a bank. Why does a bank have to be in your neighborhood for that? And, once the account is opened, withdrawls and deposits can be done at ATMs. As for lending, same deal. A bank needn't be in your nabe to lend you money. Go to the bank, wherever it is, and ask for it. If you qualify, they'll give it to you. And then you can mail the bank your repayment installments. What do people in the suburbs do? Don't they live in all residential areas? How do they do their banking? Guess what, they GO to where the banks are to open accounts and to ask for loans. OK, they go by car, but can't poorer, carless people go by subway or bus? We're talking about a one-off trip here.

And banks do NOT secure nabes. Banks are open limited hours, and don't have that many employees. At night or on weekends, a bank is just another black hole on a block. Go to Wall Street and see.