Ratner lied to the unions 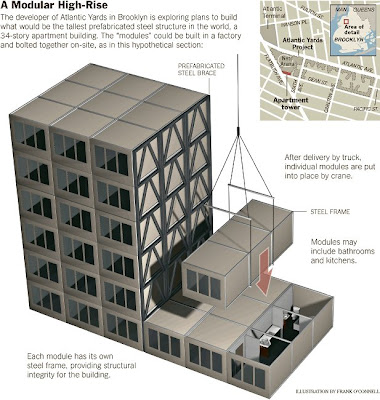 Mr. Ratner’s development company, Forest City Ratner, has been investigating modular construction for a year, but has kept its plans secret. MaryAnne Gilmartin, executive vice president of Forest City Ratner, confirmed Wednesday that the company was seriously considering the modular method, although, she added, no final decision had been made.

The company has also continued to design a conventional tower. Forest City hired Ove Arup & Partners, a prominent engineering firm, for the modular work, while SHoP Architects is working on designs for both types of buildings. The developer has also recently directed real estate brokers to scout for sites in Long Island City, Queens, that would be large enough to accommodate the modular factory.

“The company is interested in modular, high-rise construction in an urban setting,” Ms. Gilmartin said. “It’s driven by cost and efficiencies.”

But it would also infuriate the construction workers who were Mr. Ratner’s most ardent supporters during years of stormy community meetings, where they drowned out neighborhood opponents with chants of, “Jobs, jobs, jobs.”

See you at Willets Point, where the rest of the flock will no doubt be put down.
Posted by Queens Crapper at 12:31 AM

Ratner lies to his MOTHER

You voted for him, have fun.

Isn't RATner related to the RATner that Bloomie was involved with recently?

To think all those contractors went to the CB meeting ranting and raving about jobs at Willets Point. Enjoy your UN Employment, shmucks!

Dumb sheep, now they are F_ed.
They will be replaced with some Chinese cranes and engineering firms.
Now Watch these unions payola & vote these same aO's right back into office come next elections.

Personally I think these unions and local contractors got exactly what they deserved for sleeping in bed with these filthy enemy's.

Ratner properties in Queens (stop & shop anchor malls) are the most cheapest, ugly structures you ever stepped foot on. Even the NYT building on 8th Ave built by Ratner and who owns 1/2 of it is garbage. Nothing surprises me with his Atlantic yards projects to cut cost, because he spent tons, got tons from the city/state and now needs to cash out (see the Nets).

Unions are no good.
Id rather hire my own crew and be able to fire slackers and people doing sloppy work.
To many people have the notion by hiring union's they are getting qualified personal.
...its just the opposite!
You get bosses, in-laws, son's & daughter's who think they are all god, "hands" that don't give a F_ about work ethic or pride but just a paycheck.
I worked in a theater some years ago, these IA guys would work 2 hours in the morning (load in setup)then goof off, smoke cigars and sleep in the balcony till doortime, watch the show then load-out and punch out just after midnight wile on the clock the whole time (14 hours @48+ hr).
These NYC unions cost the promoter and house more then the band (The Allman Brothers)at the time.
The real kick in the head is people capable of doing the same or if not better QUALITY WORK cant join them.
Most are father & son or closed.
To add most the people in the unions loose 1/3 there pay to dues.
The only folks seeing the big $$$ are the administrators and bosses.

I cant imagine what these racketeers cost a company putting up a large building. This causes cutting corners and accidents