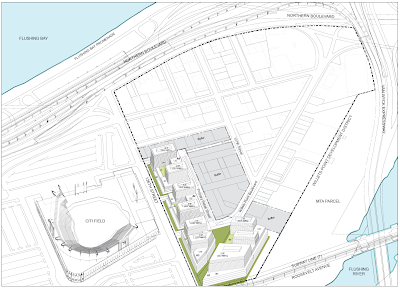 Remember that diagram of the new "Phase 1" Willets Point development which we posted the other day? And our point, that much of it won't even contain buildings? (That's the "buffer zone".)

Well, if you review Tech Memo 004, you will find that EDC does not even plan to remediate the soil within the buffer zone when Phase 1 is built. And, the buffer zone will not even be accessible to the public. It will be a fenced-off, contaminated area, directly adjacent to the built section of New York City's "next great neighborhood" and threatening to re-contaminate it. Here's the excerpt from Tech Memo 004:

"It is anticipated that approximately 12.5 acres of the District would be fully developed by 2016, and approximately 7.5 additional acres would serve as a buffer area between the new development and the existing, primarily industrial uses that would continue to occupy the north and east portion of the District prior to full build-out. It is anticipated that the lots located in the buffer area would be cleared by 2016, with remediation, grading, and site preparation activities for redevelopment commencing thereafter. It is presently anticipated that the buffer area would be landscaped but would not be publicly accessible. As noted below, additional safeguards could be required to ensure that existing hazardous materials contamination in the buffer areas would not migrate to the southwestern portion of the District." -- Tech Memo 004, page 6.

And people are supposed to want to LIVE at Phase 1?!? Since this project will likely not get any further than phase 1, if it is built at all, we are going to destroy businesses to create a contaminated void? What a great use of taxpayer dollars! Is this starting to sound like a Wilpon beautification scheme yet?
Posted by Queens Crapper at 12:06 AM

'And people are supposed to want to LIVE at Phase 1?!?'

Of course, it will be filled with asians. Look at the crappy brick box, no grass anywhere, bars on all the windows and air conditioning housing they all rush out to buy now. This may actually be an improvement for them.

Since NYC is in a renaming mood:
i.e. the Eddie Koch, RFK Bridges, etc.

Might I submit renaming Willets for "Wellington Pointe" in "honor" of that quiet, devious, elusive, little Asian devil lurking behind the scenes of practically every sellout in the borough.

You get the general idea.

How about submitting some more names to enshrine our corrupt public officials.

When this whole debacle started, the primary argument for using eminent domain was that the ENTIRE area had to be remediated at the same time to prevent recontamination from soil leeching due to the high water table. This whole project is a disgrace to the citizens of this country.

There's a sucker born every minute. Peopple will move in; further down the line they will become very sick, and we will pay for their health coverage. Ain't it grand.

What about Liu Lane? After all, he controls the numbers. As comptroller, he's a math debater.

You mean double crossing. Add that rotund Kelty to the mix. It's a big intersection.

How can you smell the difference?