Practice what you preach 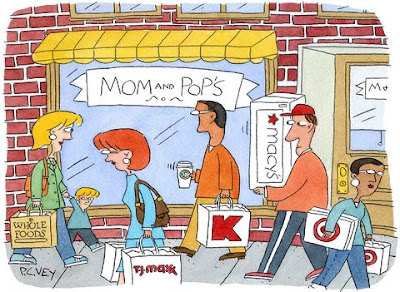 Guess what: Your neighborhood isn’t a Hollywood back lot. “Liking the idea” of a store doesn’t pay its bills. I’m not talking here about the venerable old places that close because the landlord is quintupling the rent, or because the proprietor’s children are not interested in continuing the family business and would rather be rap producers or America’s next top model. I’m talking about the businesses that are gamely hanging on and would gladly continue — if they had customers.

So don’t just stand there and admire Russ and Daughters’ retro neon sign. Go in and order a quarter-pound of their life-changing whitefish salad. Buy a book at an independent bookstore every once in a while, instead of ordering it on Amazon. Patronize a restaurant that offers “chops.” That quaint old hardware store that’s been around since the Truman administration? Venture in and buy some light bulbs. Yes, they may cost a little bit more (although finding an actual clerk or the product itself in a big-box store will almost certainly cost you more in time), but I consider it a tax to ensure that New York City doesn’t look like anywhere else.

You’re only allowed to complain about that Chase bank or Duane Reade on the corner if you actually give business to the mom-and-pop stores that you cherish so much. Otherwise, I don’t want to hear about it.
Posted by Queens Crapper at 12:08 AM

"children are not interested in continuing the family business and would rather be rap producers or America’s next top model."

Thank you jew man for inundating the youth with that garbage media you pollute the TV,RADIO and NEWSPAPERS/MAGAZINES with.

"Go in and order a quarter-pound of their life-changing whitefish salad. Buy a book at an independent bookstore every once in a while, instead of ordering it on Amazon."

If their product is better than I surely will. Let the free markets be free and consumers choose.

Whatever saves you the most money do it. Because that MOM AND POP store aren't buying anything from you, so they can shove it.

And thank you for spreading your anti-semitism. Your second paragraph invalidates everything that you've said here.

I agree with this. I work on 36th ave and 33rd st. in Astoria. My younger coworkers would rather go to the Subway sandwich place on 31st st., rather than go ACROSS THE STREET to the Italian sandwich place that will make a bigger, better, fresher, CHEAPER sandwich. When I ask them why, they just shrug. Literally. That's their answer. I guess it really comes down to having "Five, Five, Five Dollar Footlong" pumped into your head all day long that makes it more familiar.
Hardware stores are the same thing. Go to Square Hardware on Ditmars and 37th street, and it's empty. However, the guy working there knows everything about everything, and will actually TALK to you like a human being. No charge.
Damn hipsters.. they'll be the first ones to complain when these places close and sushi restaurants come, but then they'll be sitting there, talking about "creme fraish" on Astorians.com, and about how Brooklyn is sooo last year.
Same goes for the hispanics, jews, chinese, arabs, japanese, blacks and koreans.

The mark of an intelligent debater - casting the "jew man" as the scapegoat. It takes a towering intellect to see the problem so plainly. Very impressive.

Sad that his honest comment about free markets is drowned out by his aggresive stupidity.

Anon#1 Are you a Nazi? What's your address? What's your name? If you went to my school, you would have a whole hoard of people WAITING TO POUND ON YOU! why are you not dead yet? lol

Very true. I do my best to shop only at local stores, even when it costs me. But sometimes I, too, am guilty of this. When it comes to clothes for my child, for instance. I'd love to buy from local stores, but there aren't many that offer the merchandise I need, and those who do are boutiques who charge three times as much as Target.

Reminds me of a few Flushing residents complaining about the closing of their beloved Key Food, then complaining when an Asian Market opened in its place. Maybe if they bought a few things, their Key Food would still be there to sell them bologna and fresca.

De Blasio preaches his pro small business homily while he takes mega buck donations from the real estate industry. Beware this wolf in sheep's clothing. You Queens sleepless look like tasty lamb chops to me.