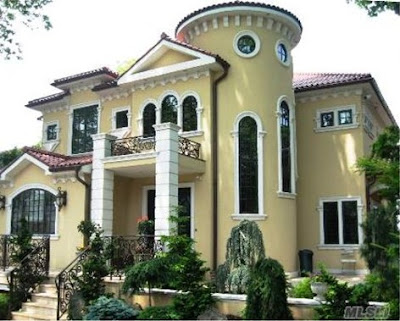 The Fug Chronicles: The Ugliest Homes For Sale in Queens

We've garnered quite the reputation for Queens Crap.
Posted by Queens Crapper at 12:00 AM

I hate to say it but those houses are not half as bad compared to the new (a/c box under every window)brick crap boxes they are building today in most of queens.

I have to give some respect and affection to over-the-top wild-assed tacky fantasy buildings. I just don't want them coming at the expense of charming older buildings (which, admittedly, may have been seen the same way in their day), which they often do.

But I hate the bland boxes devoid of greenery that actively repel neighborhood character.

The second link shows exactly what commenter #1 is talking about.

I second Erik's comment.
Taste and style are subjective, and while many of us think this is repulsive, someone likes it enough to pay big bucks to live there.

This house is so much better than the tacky orange brick/fat white column/backyard mural guinea crap going up all over North Flushing, Bayside and Whitestone.

Who doesn't love the miami-ization of Queens Ny!!

The house in the picture is far from the ugliest house in Queens.

There is an almost exact duplicate of the house in the picture in Flushing (somewhere between 146th ST and Parsons Blvd and Bayside and 33rd AVS). While, clearly not the ugliest of the newer McMansions in the area, it fills the entire (not large) lot. It replaced a house 1/3 its size.

How is that not a zoning violation?

"There is an almost exact duplicate of the house in the picture in Flushing (somewhere between 146th ST and Parsons Blvd and Bayside and 33rd AVS). While, clearly not the ugliest of the newer McMansions in the area, it fills the entire (not large) lot. It replaced a house 1/3 its size.

How is that not a zoning violation?"

The house in question is on a very large lot - 50' x 175' - and the house itself, while large, is not enormous, particularly for its lot - it's around 3,000 square feet while under the R2A zoning, it could have been around 4,800 square feet (because the lot is so deep).

It did replace a great little 1930s bungalow. However, when that was demolished, another builder came in and started constructing a house with no support beams! It stood there for several years before it was taken down.

The property was then sold and replaced with the current house (which actually is only about 500 square feet larger than the 1920s house next door).

I like McMansions! I just abhor multifamily homes. The ppl who are so quick to say they are ugly are either 1)poor(have under $500k in cash) or 2)jealous
If the house is protruding out of the block and is causing an eyesore/up against my side of the fence, then I can understand why ppl would h8 it. Other than that, leave the McMansions alone! Some of you are just H8ers fml!

It is selling for almost $4M, in Queens? That's insane.

re Miami-zation: I read an article once on which a young, Israeli immigrant real estate exec exuded that the East River waterfront of Queens and Brooklyn would look like Miami. Scary words!

I wish towers were required to have spires of some sort - to force some creativity. Hate the endless flat top boxes. No aspiration or inspiration.

As a lifelong resident of Forest Hills, I demand a recount of some sort.

Not ONE of the craptastic Buhkarian-designed houses in the Cord Meyer section of Forest Hills made the list?!?!?

As far as the Astoria Ugly piece goes, all addresses in Queens have a dash in their street addresses. It's in everyone's deeds and blueprints.

GET YOUR FACTS STRAIGHT DAVID (TRANSPLANT)

you mean that it's no longer possible to live richly with an MBA, MD, JD, or PhD, and only dirty money can afford such homes?

Pretty much. If you get one of those degrees you're in debt up to your eyeballs for years, if not decades, after.