CB7 meeting was session in stupidity 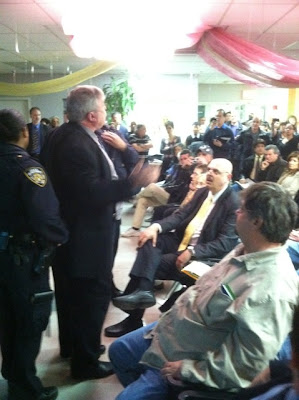 "During tonight's sham CB7 meeting with DOF Commissioner Frankel, Community Board Chair Gene Kelty attempted to have the police remove Bob Friedrich. This was in response to Bob insisting that his voice be heard.

Many of those in attendance asked me who Kelty was and they referred to him as a goon and thug. Has the time come for Kelty to resign?" 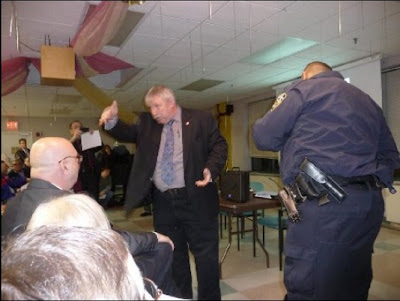 Toward the end of Frankel's remarks, Bob Friedrich, president of the Glen Oaks Village Association, objected to what he called the commissioner's "lack of specifics" in terms of the methodology used by the city to determine the value of condos and co-ops.

"All we wanted to know is how you justified such high tax valuation increases in a time when co-op values are declining," Friedrich said. "He [Frankel] gave us nothing."

At one point, according to Friedrich, CB7 chairman Eugene Kelty summoned police officers to escort the longtime co-op president out of the Union Plaza Care Centre in Flushing — the venue for last night's "un-sanctioned" community meeting.

"It was Gene Kelty who was disruptive and disrespectful," said CB7 board member Warren Schreiber, also president of Bay Terrace Co-op No. 1 and the Bay Terrace Civic Association. "Bob Friedrich should have been allowed to have his voice heard."

However, another attendee at last night's gathering, who did not want to be indentified, saw it a different way.

"Kelty's behavior may not have been appropriate, but Bob's was worse," said the source.

Funny how the person criticizing Kelty used his name but the one criticizing Friedrich is "a source". Who is the source - Bitterman or Apelian?
Posted by Queens Crapper at 7:46 AM

Thuggery is SOP at CB#7 when a citizen speaks his mind contrary to the board's wishes!

Yes, it's certainly time for...not only Kelty to be dismissed...but the entire board to be reshuffled...with many of those complacent, Apelian bobble heads replaced!

Might the slovenly appearing Kelty, using the tragedy of his fallen 9-11 FDNY "brothers" as his excuse, taken to the bottle...resulting in these spurious outlandish outbursts?

CB#7 is great at using the NYPD as their personal gestapo.

But where are these cops when a drug dealer is present in your nabe?

I must admit that often Bob Friedrich is a general jerk...but he does have a right to be heard without being herded out by CB#7's "finest"!

What's the difference between CB7 & corruption?

Get rid of 'em all. Wishful thinking. Who's gonna do it? Our corrupt elected officials???

Community Board? Looks like Kelty is the community broad. Use a wide angle lens when you photograph him!

I could care less about you coop owners. I don't live in one! Now get on with your lives or I'll call the police on you too!!!

Shouldn't the threshold be pretty high for requesting police intervention?

KELTY IS A COMMUNITY BOARD CHAIR AND AS SUCH HE IS A CIVIL SERVANT! WHY CAN HE NOT GET THAT THROUGH HIS THICK SKULL?

HE OPERATES ALL HIS MEETINGS THIS WAY AND WHEN A MEMBER OF THE COMMUNITY DISAGREES WITH HIM HE SHOUTS THEM OUT AND DISMISSES THEM.

I WAS AT THE MALBA GARDENS TRAFFIC COMMITTEE MEETING WHEN KELTY TRIED TO SAY THAT 14TH ROAD IN BEECHHURST BY SHULMANS HOUSE HAS BEEN A ONE WAY FOREVER. CENTOLA INFORMED HIM THAT WAS NOT THE CASE. KELTYS RESPONSE "YOU DON'T KNOW WHAT YOUR TALKING ABOUT, KEEP QUIET!"

GUESS WHAT CENTOLA WAS RIGHT...

IT IS TIME FOR THE ENTIRE EXECUTIVE BOARD OF COMMUNITY BOARD SEVEN TO BE REMOVED!!

Why the officer not being disciplined?

The only way to get rid of people is to complain to the BP or the appointing councilmen, mostly Koo, Halloran gets to appoint some aswell. That's first.

If you don't go to meetings don't bitch. Go to meetings. Become active. Get nominated and join the board.

Once on the board, you can start moving ahead to have these clowns removed. Bitterman can only be fired by the board.

Kelty is not employed by the city but on the board as a volunteer like the other 49 members.

Here is the rules, read em, learn em, lets make these changes ourselves.

We do not need to be "on the board" to have these clowns removed. And, Helen Marshall will not do it. Instead of taking corrective action, she congratulates Kelty and Apelian. Marshall is therefore part of the problem, not the solution. The solution will come from enforcement authorities outside of CB7 and outside of Queens.

The article does not report: Was Friedrich actually removed by police? Or was the officer "summoned" by Kelty to remove Friedrich, but then did not do so?

Do the police have paperwork or an incident report of any kind relating to this? How have the police characterized what occurred? None of that is reported, but should be.

Marshall is therefore part of the problem, not the solution.

Oopsy. I forgot to wipe the "solution" off my chin.

Why the officer not being disciplined?
-----------------------------------
An alarming amount of today's cops are not properly trained in such matters, and thus are easily pushed around by the brass, local politicians, members of the press and others with a bit of authority.

This is the very same CB#7 that put 5 burly cops on 5'7" Joyce Shepard many years ago for speaking her mind.

This kind of shit you could have expected in Nazi Germany.

But that's the way things are apparently still done in Flushing.

Silence the truth with gendarme strong-arming.

Just because Kelty wears an FDNY uniform doesn't entitle him to act up like a bullying SS sergeant!

He's a nasty misogynist, by the way, when any woman dares to get up on her hind legs and show some moxie.

I guess his "manhood" ain't so secure.

You've always got to wonder about unmarried firemen...I mean living with all those guys in very close quarters!

Has Gene got the top or bottom bunk during sleep-overs?

Kelty is a bullying drunk!

Boy can he put down the hard stuff!

He's going to be Chairman of CB7 for a very long time, as some years ago he and Apelian got CB7 to repeal term limits.
(Unless, of course, the Feds get to them first.)

(Unless, of course, the Feds get to them first.)

Your mouth to God's ear!

What Bar does he hang out in?


This just in to the newsroom...