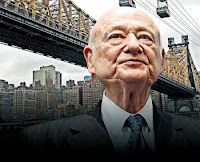 This week you will vote on re-naming the Queensboro Bridge for former Mayor Ed Koch.

This is not about Ed Koch.

This is all about Queens.

And about how you feel about Queens and the people who live in Queens.

The bridge is Queens's bridge, not a plaything that will respond to any name it is called.

The Queensboro Bridge sums up Queens: hardworking, tough, practical and a little rough around the edges.

The Queens Civic Congress is an umbrella of more than 110 neighborhood based organizations representing residents of every part of Queens. QCC is the only borough wide civic group of its kind in New York City.

QCC urges you to vote for Queens. Vote to retain the current name of the Queensboro Bridge.

Print their email blast back in December on this topic.

Queens Borough President Marshall weighs in on the bridge-naming issue

Is this really what the city council works on?!?!?!?!? Especially in 2011!! WHy are'nt they brainstorming on how to save the city some money and make the quality of life better for the people living here! The local political front has become a POPULARITY game not true improvement!

What a bunch of K(r)o(t)ch suckers!

Just like 6th Avenue...
they tried to rename it Avenue of The Americas but everybody still calls it 6th Avenue!

FUCK YOU BLOOMBERG AND YOUR BEND-OVER CITY COUNCIL COWARDS!

And RFK Bridge is still Triboro to most of us.

A late letter in the local paper is not enough, Pat. You should convene an emergency QCC civics meeting, invite councilmembers.

They are meeting tomorrow. Not about this, but it's their regular meeting and some mundane topic of interest to eastern Queens is the main item on the agenda, as usual.

Like anybody really cares what Miss Patricia Dolan, spinster, has to say besides herself.

My hat's off to her but even this gritty, determined old Irish biddy can't fight the torrential corruption that deluges Queens.

Don't spend a minute and a dime more on renaming any bridges at all!