Woodside - come just for the food! 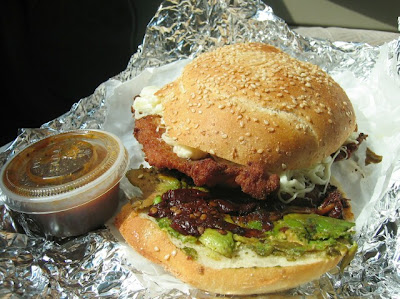 For many people, Woodside, Queens, is simply a place on the way to another place. The 7 express subway line stops there, and it’s the first station for most Long Island Rail Road trains out of Penn Station.

For those who make the neighborhood a destination, though, an inviting dining scene can be found, one spiced up by Asian and Latin restaurants that have opened in the past decade or so.

Here we go on culinary safari again. In case you missed it, this piece is speaking directly to those who summer in the Hamptons and attend the U.S. Open. And to think earlier generations of wealthy Manhattanites at one time owned mansions here. Your little dig at the area in the first sentence has not gone unnoticed, foodie. You could actually make the same statement regarding just about any neighborhood in the city, since most have multiple transit connections.
Posted by Queens Crapper at 12:09 AM

Yeah,
like those US Open attenders
or that snotty Hamptons crowd is going to interrupt their seamless ride on the LIRR
just to grab a burger at Donovan's!

They're headed right back to Manhattan for a far superior
"slider" at the likes of a P.J. Clarke's etc. and soak up some real upscale ambiance preffering not go slumming in Queens despite its
well touted "vibrant diversity"
(ha, ha)!

Hello out there Terri Osborne!

Only in a political KKK
clubhouse run
borough like Queens
could Ms. Osborne continue enjoying
her high paying patronage position!

She'd be a trainee
coffee/errand girl in Manhattan!

Mystery meat and no color coded board of health inspection tags on the door like in other cities.

Go ahead fool. Eat away!

The real foolhardy play culinary roulette eating "flied mice"(?) or whatever, in Flushing!

Well that's a dish
of a different nature.