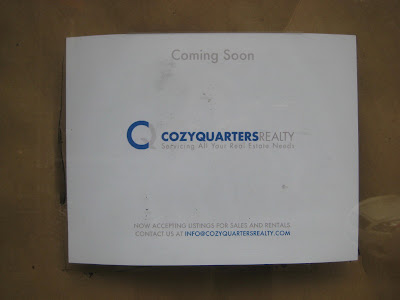 Lost City weighs in on the state of the City:

We rely on a few specious "industries" to keep the City's engine going. There's financial services, in which people make money shuffling other people's money around. Then there's real estate, in which people either many money feeding the same living spaces through the system again and again, or tear down existing building so they can build news one, creating temporary construction jobs and upping the ante on living costs each time. This process is repeated when necessary. Finally, there's tourism, when folks from other countries come and gawk at what appears to be a working City, and spend lots of money at the restaurants and bars and arts attractions that we keep opening for them.

In recent months, the Recession halted the decade-long development boom. Poof! There's goes one source of income. Then the financial crisis on Wall Street threw financial services against a brick wall. Poof! Did it surprise anyone that, with two of the aces in City Hall's economic house of cards withdrawn, the City suddenly went from Boom Town to Bust? Now, tell me again that Bloomberg is a great business manager. His company, called New York City, is going down the drain.
Posted by Queens Crapper at 6:48 AM

Mayor Bum-berg is just like those other bumbling CEOs busy polishing up their lines of BS while loosing sight of the cash register.

BUT WE'RE THE ONES WHO WIND UP GETTING ROBBED ...NOT THEM!

While us....
we're left only with prayers
that we'll land free of the rocks!

I think it'll be back to the 1970s for us all soon... that time
when NYC, pretty much, went into receivership!

Wasn't that when the Municipal Assistance Corporation.
(? or whatever it was called)
was set up...big MAC Bonds etc?

If we need to diversy our economy perhaps we should not be against the FedEx facility in Maspeth. That would provide good blue collar jobs thatwould not be impacted by financial services.

Yeah, you boob,
like FedEx will be NYC's savior.

Go and roll yourself another one!

"If we need to diversy our economy perhaps we should not be against the FedEx facility in Maspeth."

FedEx is already in Maspeth. Do you mean Astoria?