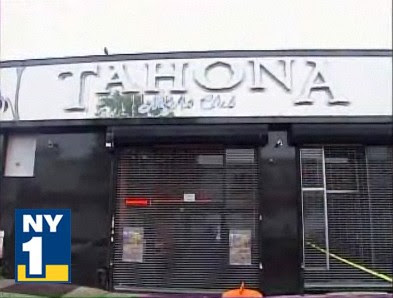 Police say as many as seven men were stabbed during a quarrel at a nightclub in New York City. Two are in critical condition.

The bloody fight erupted around 4 a.m. Sunday inside the Tahona club in the Queens neighborhood of Astoria.

Police are trying to determine the exact number of victims _ from five to seven. Two of them are in critical condition at Elmhurst Hospital.

The Tahona is a flashy club with state-of-the-art sound, video and lighting, featuring live bands and a big dance floor.

According to this great summary by Gothamist, this was to be expected.
Posted by Queens Crapper at 12:25 AM

How annoying Steinway can be all the time.Even the Commerce bank is rude to deal with. Not surprised this happened at all just hope the 114th actually took some people away instead of just saying go home and not doing paper work.Idiot thugs keep making Astoria so wonderful.

"Diverse" opportunities for
injury or death
abound on a once stable street!

H-m-m-m,
an extended tour of duty in Baghdad
might prove to be a safer alternative to an evening stroll (unarmed) down Steinway St. !

And the Queens KKK
(Krowley's Klubhouse Krooks)
keeps on pumping out their BS
extolling the virtues of our
newly arrived 3rd world "neighbors"!

Dont bother posting unpleasant things like this on astorians.com.

It is forbidden, or if the ugly head of reality intrudes (it has at this moment all of 6 postings), stuff like this gets grudging space then on important theads like 'best pizza in Astoria' - 57 postings, 'Seva - new Indian resaurant' - 81 postings, 'Mojave restaurant' - 267 postings, 'Pistilli apartments' - 365 postings mostly positive (gag), and 'last posters wins' 11,292 postings'.

Quote
Astorians.com is a general interest website open to anyone concerned with all things Astoria, from the serious to the sublime to the ridiculous and everything in between.

It’s not a political action committee in my opinion and hopefully never will be. The website exists as an open forum with no agenda, it is instead a fun and welcoming place for people to hang out, share, communicate, learn, and meet-up -- people use the site in all sorts of ways and it's one of the reasons why it is a success.

If political activism is your passion, you are more than welcome to state your opinion, promote your cause or publicize your action, as long as you do it within the board guidelines:

You’re also more than welcome to organize other users of the site to join you in support of your issue offline.

But let’s be clear: astorians.com does not take sides, there is no agenda to set and it’s not the job of merm or the moderators to organize people or rally the community. That’s your job if you wish to take it on.
Unqutoe

No wonder the politicans treat the residents like children.

What purpose would it serve posting it there anyway? All you'll get is the same-old "oh, gosh, gee!" handwringing. And in less than 36 hours, they'll be back to whatever mundane issues that seem to loom large in smaller minds.

That board has been beaten into a sheep-like community, due in no small part to the make-nice police that run it.

And in other news, the Morrell Wine Shop and Bar at Rockefeller Center celebrates it's 59th year in business. Not one fist fight has erupted during those 59 years, although there have been a few heated debates over merlot vs. pinot noir, and once in 1963 a snooty oenophile attempted to "bitch slap" a fellow oenophile with his leather glove in an argument over vin santo. Other than that, it's been a peaceful 59 years.

To anonymous who posted about Astorians.com:

Do you know who the ultimate owners of that web site are?

Curious, because they indeed seem like incessant cheerleaders, and they never seem to allow any dissent from certain viewpoints. I wonder who's the real "puppeteer" behind the web site?

Wade, you ascribe way too much foresight and intelligence to the person behind that message board.

This story is a little skewed. the people who did the stabbing were not fighting with the stabbed ones inside the club, they happened to walk outside at the same time the other got kicked out and then the criminals overheard the innocent talking about the fight inside and they thought they were talking about them and proceded to stab them, i know because i was there

Can you imagine the intellectual level of a person who goes to places like that? (Hint: It's lower than Dennis Gallagher's.)

This story is a little skewed. the people who did the stabbing were not fighting with the stabbed ones inside the club, they happened...
? Its still sounds like a mess and why the hell should it happen at all in the first place.Sad and plain stupid behaviour.

Yes the Astorian is a childish cheer fest of a blog and ive seen the few times ive observed that site that there was people from both sides of the political view.But they sure are ignorant 20 somethings to whats actually going on around them in Astoria.

wade, email me and i will get you up to date

An officer looks for evidence along Steinway Avenue Sunday morning.

Five men were stabbed outside a Queens nightclub early Sunday after a wild melee broke out involving dozens of club-goers, police and witnesses said.

Hundreds of partiers were packed into Tahona Night Club on Steinway Street in Astoria about 4 a.m. when a chaotic fight erupted.

"Everyone was throwing chairs, throwing bottles," said a 22-year-old Valley Stream, Long Island, man who was inside.

The club shut down, and the fight spilled onto Steinway Street near 35th Ave.

"Fifty kids brawling over there," a witness who works at a nearby tanning salon said. "Stomping at each other, girls hitting guys - it was crazy."

Two females were also assaulted, police said, but they did not receive serious injuries.

Police said the five injured men - all of whom were 18 and 19 but not identified - were initially approached as they walked north on Steinway Street. Several men jumped out of a red vehicle and stabbed them before fleeing, cops said.

No arrests have been made.

Four of the victims were taken to Elmhurst Hospital while the other was taken to Weill Cornell Medical Center.
They were listed in stable condition.

Neighbors of Tahona, which features a big dance floor and is home to many Reggaeton acts, said it opened about a year ago. An employee there refused to discussed the riot.

"Nobody's going to say nothing right now," he said.

The club has drawn the ire of some of its Astoria neighbors.

"Soon as the club comes we have nothing but trouble," said a chef who works on the next block.

Guys, if this doesn't wave a red flag that things are getting out of control in Astoria, I don't know what will.

This is outrageous. This is unacceptable.

That entire section of Astoria is starting to slip and the stain will just spread out to the rest of the community. Look what is happening to what is left of the trashed neighborhood of Dutch Kills (where someone was murdered a few weeks ago).

And yes, my smug neighbors, this will soon spread to us in Ditmars soon, too.

Calling the local pols? They and their minions have 10 times the info about this than any one of us. What will they do (besides show up for a photo and expressions of concern)? Do they really care? Or better yet, what creative ideas do they have to solve this?

Gioia seems to be fixed on world hunger (as his community of Hunters Point gets wiped off the map) and Gianaris, well has anyone seen Gianaris lately? Maybe he can blame this on Con Ed, too. [Message to Michael: fix the damn thing or step down already] How about Onorato who is about to run for office again? Has anyone seen him lately? What is he going to do about this (or anything else) in the condition he is in - except run for office or give the seat to another hack?

And considering the reputation of our community board and precinct council, does anyone think anything useful will come out of those bodies?

I would thing this would never happen under Vallone Sr, Delaney, or the old guard Steinway Merchants Association. In those days, they took care of Astoria while much of NYC rotted and burned.

Sure people will still move into Astoria (which seems to be the only benchmark used for the health of a neighborhood. They are also moving into Elmhurst, Corona, and Flushing. And how long do they stay? Go to those communities if you want to see what happens to a community that is little more than a bedroom, a temporary waystation.

Outside of solving every problem with a development proposal I haven't seen any fresh ideas (or faces in authority) in this community for decades. And it shows.

Something is going to have to be done.