A BIG CRANE IN THE NECK 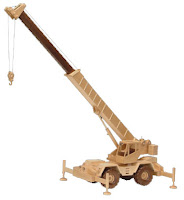 Hundreds of construction workers may be idled in the coming weeks because of the city Buildings Department's sudden imposition of new rules on tower cranes, an industry lobbyist said yesterday.

Many crane operators don't have those manuals and own cranes whose manufacturers are out of business, said Louis Coletti of the Building Trades Employers Association. It could take "several weeks" for contractors to gather the information they need, he said.

"This is going to cause project delays that are going to cause some level of unemployment. You just can't spring these rules on people," Coletti said.

City officials did not respond to requests for comment.
Posted by Queens Crapper at 12:05 AM

if less people get killed who cares, cry me a fucking river

Lets see if this helps at all.Im still waiting for bloomterd to take some responsibility and actually care about the two previous wrecks.Waiting..waiting.People get together and sign petitions to have bloomie held liable with something by now.