Grandma gets gussied up 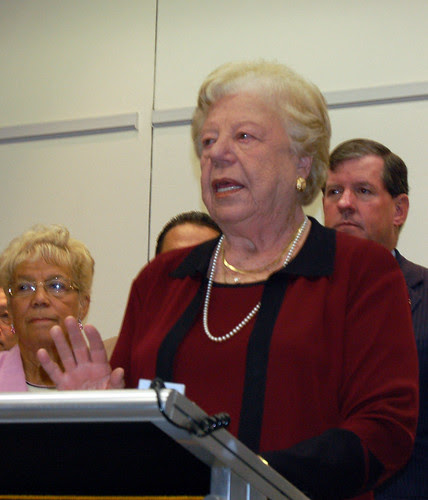 Talk about a pit bull in lipstick!

The trio joined the Queens Chamber of Commerce in a cheerleading session for Keep it in Queens, a new Web site and database launched today that is geared toward helping Queens-based businesses access suppliers, distributors and service providers located in the borough.

If anyone had any doubt that the concept was formed with the proposed development of Willets Point in mind, Shulman cleared it up quickly.

“All of you who are here today are interested in the future of Willets Point,” she said. “Keep it in Queens will be a vital tool to ensure that the small businesses of the borough benefit from this project.”

Okay, I looked at "Keep it in Queens." I don't see how this will help WP businesses.

Apparently, Jamaica is being choosy about which businesses it will take and the City is sending out strongly worded letters in favor of its plan to council members.

Meanwhile, LaGuardia was supposed to send help to WP this past week, but didn't, according to a commenter on Iron Triangle Tracker.

P.S. What happened at McShane's pro-development rally on Sunday before the last game? Anyone show up?
Posted by Queens Crapper at 7:12 AM

She looks like she got her cosmetic and fashion advice from Dame Edna.

Marshall and Shulman actually came out to do some work? Don't they have to be home watching their "morning programs" before they get out of their house coats and do some work?

Evidently, McShane's pro-development "rally" did not occur. Again, all talk and no action.

No one in the vicinity of the stadium had seen or knew anything about McShane or his "rally." If it did occur, then it was on such a small scale as to be invisible and of no significance whatsoever.

That McShane represents any pro-development group is just a hollow myth. With the exception of one individual, no one posts pro-development comments at McShane's web site. It's become clear that McShane's site was designed as an unofficial channel of communication to be used by NY EDC and the LDC for their benefit. It was also intended to create the impression of widespread support for the redevelopment, but it is very clear from the inactivity at the site and cancellation of McShane's "rally" that there is no such support.

Regarding Shulman & Co. announcing a program entitled "Keep It In Queens," while simultaneously stating that existing businesses will be pushed out of Queens if the proposed redevelopment of Willets Point proceeds -- that is the height of hypocrisy. Apparently we're supposed to notice what they say, and not what they do. Well, we're more alert than that.

Moreover, why does Helen Marshall allow herself to be repeatedly upstaged by Shulman, who is no longer an elected official but behaves exactly like one?

a) Helen Marshall is a dip shit.
b) Helen Marshall was awarded her patronage job in return for her loyalty.
c) If they let Helen speak, the City looks like a bunch of idiots. With Claire, at least coherent sentences are spewed forth.

That McShane represents any pro-development group is just a hollow myth.

he's just a 23 year old kid with a web site. He doesnt have any expertise as an organizer or group leader.

word is the edc is desparite and trying everything to get people to sign . house of spice & crown deals are said to be dead while they are about to announce a deal for parts authority . so they now have 6 out of 70 & still a long way to go because its not only the big 10 that needs to be bought out but all businesses. also wheres the $$$$ coming from ? lets cut cops, teachers & fireman for willets point !! mr kelty you happy now?

"keep it in Queens"? is that like what happens in Vegas stays in Vegas?

what about keeping tenants in Queens instead of harassing them out and pricing them out? She's got her lips sealed on this hot topic. must be the lip stchick she's using these days.

your info is somewhat flawed. House of Spices does not have a deal.. or do they?

Uh, read the article I linked to about Jamaica for the answer.

Keep it in Queens, is that like "keep it in your pants"?

the "article about Jamaica" talks about Jamiaca's efforts to lure House of Spices being broken down.

Well, you still can't put lipstick on a PIG!

She cured my hiccups...the scary bitch.

Gallagher may be following all this.

The thought of an elf
with a pink erection is too much
for me before breakfast!

Whores and handmaidens to developers!

Did I say maidens?

They're both train wrecks that
even a home makeover show expert couldn't camoflage into
an acceptable appearance!