Violent crime is way up this year 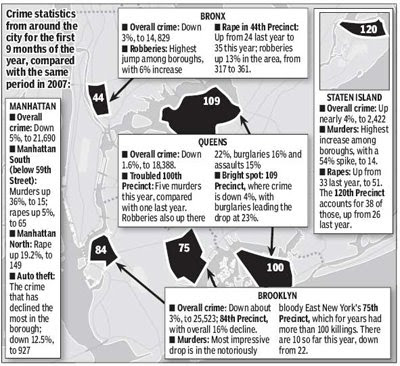 Murders, rapes and robberies have shot up in the Big Apple this year, despite a drop in overall crime, police statistics show.

IT'S MURDER OUT THERE: CITY SLAYS, RAPES AND ROBBERIES SOAR IN '08

Homicides jumped nearly 10 percent, to 377, compared with 344 for the same time period in 2007, according to statistics recorded through Sept. 21. If the trend continues, the city will end the year with about 550 killings, compared to 496 last year, the lowest in nearly four decades.

Faced with a looming $90 million budget cut and an already shrinking force, the NYPD will be hard-pressed to hold the line against violence - especially considering that overtime, the principal weapon in blanketing trouble spots, will likely be slashed, insiders and observers agree. The department has gone from a high of 41,000 cops to about 36,000.
Posted by Queens Crapper at 7:13 AM

It'll go up even further
as the economy continues to plummet.

Check out the crime stats
during the great depression!

A lot of folks were out of work
in search of some new cash flow opportunities.

And now we have those bigger gangs
to deal with.

Go to Vermont, or some other sane place that cannot prohibit you, and buy a firearm. To me, it's worth the risk violating local (illegal and unconstitutional) gun control laws.

Hey RidgeWoodian. You wanted to know what the crime stats for the Rockaways was? Well here ya go...

Troubled 100th Precinct. Five murders this year, compared with one last year. Robberies also up there.

Gonna get worse, when many of the welfare brats and tweeded get booted out of there houses or cant buy drugs, booze or food. They will start to "Jones" and go nuts
REMEMBER KATRINA !

Planet of the Apes is coming to this Island...remember Katrina !

Yes buy guns !!!
People should also get there money out of the bank's first. Cash will have value for at least a little while and plastic will be worth nothing.

Second, buy things that will hold value no matter what happens to the dollar and will still be of worth when the "Amero" comes into play (especially survival gear, because no one know how long the fallout will be)
I would buy physical gold, bullion, bleach, canned food/dried milk, guns, heating oil and ammunition, things that you can trade and barter if need be.
Get CB's GMRS radios and form block patrol shifts...the cops are not going to be much help or be home protecting there own familys

Keep land or anything that will still be worth something when paper money crashes, bailout or no bailout, is inevitable and is merely a matter of time.
Especially if Bin Laden the flicks the last Domino

"It'll go up even further
as the economy continues to plummet."

Plummet? The unemployment rate has been the lowest in history for an 8 year span. Inflation is very tame.

Did you live during the Carter administration? Now that has a bad period.

And before anyone asks, the current banking crisis, which the government caused due it's regulations for lending top sub-prime lons, has had little to no effect on the overall economy, yet. And the yet may never happen if congress gets it;s act back together.

It will be worse then the Carter years, people (sheeple) are not using there heads.
TURN OFF THE TV !!

The U.S. Government will try to shore-up the banks and the economy by spending more, yet no one will lend them money.

The government will have no choice but to buy time by printing several trillion more dollars. IT WONT WORK since the rest of the world will reject our currency as it will then be worthless to them.

When that happens, all the goods we import from abroad - including oil - will become stunningly expensive, then run out as overseas manufacturers simply refuse to accept our worthless money.

With almost all U.S. manufacturing jobs having been shipped overseas under NAFTA and GATT, we don't even have the infrastructure to resume manufacturing here in America.
When oil stops flowing in from overseas because OPEC won't take our cash, the real trouble starts.

Without oil to provide diesel fuel or gasoline, trucks will not have fuel to transport food or anything else.

Roving bands of hungry savages will then take to the streets looking to feed themselves. It will be ugly anarchy. People will be killing other people for food.

Police will be almost immediately overwhelmed, making 911 useless. If you cannot protect yourself, your family you will likely die or loose everything.

The savages will then turn to the suburbs !!
Its comeing....NO JOKE

The last time it was this bad was during Reagan circa 1983 1984 with MASS unemployment where he was advised by his own cabinet to raise taxes because he slashed everything else.Just saw a documentary on it and lived it during those years besides the stacks of articles I have during that time.Its deregulation that is the problem that Reagan was a fan of as well as the Bush criminal clan.Ya see a surplus keeps the dollar worth something and debt is a HORRIBLE x on the dollar of course.

Have to teighten up.
This is not necessarily a bad thing.

We are entering a new phase of life here in America: survival of the fittest.

With no jobs, the illegal aliens won't have any incentive to stay, so they'll leave too. That will be a really good thing because we'll finally be rid of "them" too.

But the best part of this will be what happens to the greedy money-changing vipers that caused this mess.
They are going to get it good !! In the end every one of us knows they are the ones who caused all of this financial turmoil.

If most involved (look up the bank suits who profeted from this) thought World War 2 was a holocaust, they should stay tuned;

In the end things should be better for decades.

For the short-term, the pain of survival of the true fittest. In the long term, the gains will ultimately outweigh the pain.

This is long overdue, New Yorkers underdogs can take it just prepare, sit back and watch the show.

it is the leftist scum that are guilty you shit

Crime's up by the numbers the NYPD reports, now add in the numbers they've played with. In some precincts crime victims practically have to be to get a report taken.

it is the leftist scum that are guilty you shit


Says the wing-nut, neo-con Rush Limbaugh. Great sourcing. While you're at it why don't we just ask Hitler what he thinks was the cause of Germany's financial breakdown after WWI.

Go to that link and learn the truth as to who is to blame you jerk off
it is the leftist scum that are guilty you shit
HA ha.
OK buddy if you like dismantling everything FDR did to secure this country after the depression you ungrateful fox news, Roger Ailes,supporter of 10 billion a month to steal Iraqi oil and bankrupt the country for the neo con private contractors that does not benefit the citizens.Typical new con with the temperment of bill Orielly.

overall crime down ? keep putting people through the system for pissing on the street and marijuana and you can get it down even further next year ! juke those stats nyc ! make us look "Safe"