Here come the tax & subway hikes, but rebate is safe 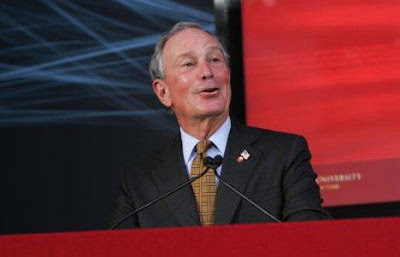 Mayor Bloomberg will try to hike the city's property tax by 7 percent six months early - and even that might not be enough to fill gaping budget holes that are sure to widen amid Wall Street's meltdown, according to insiders.

But Bloomberg has indicated in recent days that the $1.2-billion-a-year tax cut granted two years ago is a luxury the city has to pull back.

Hiking the tax on Jan. 1 would generate $600 million more that could be used to help offset a $2.3 billion deficit projected for 2010.

"Anybody that is in city government and hopes to run for office a year from November will have had to stand up and be counted on balancing our budget," the mayor said last week in a reference to council members he's going to ask to vote for higher taxes.

With staggering losses that they can continue to carry over, many firms in the financial sector won't be paying any city taxes whatsoever in coming years, according to the mayor.
____________________________

New York City homeowners don't have to worry that their annual $400 property tax rebates will be eliminated as the city looks to raise revenues amid the shaky economic situation.

Mayor Michael Bloomberg says he won't eliminate the rebate in place since 2004.

A separate 7 percent property tax cut put in place last fiscal year and added again for this year may be in danger of being eliminated.

Only months after announcing two fare hikes, the MTA is asking its agencies to develop budget-tightening scenarios that could include service cuts if the economy worsens or local government does not offer more money, an official said Monday.

Even the talk of cuts immediately upset transit advocates, who argued that the system’s growing ridership makes service reductions senseless, and suggested the call may simply be a ploy to get more funding for the cash-starved organization.

Each agency, including New York City Transit, must come up with a contingency plan by next month that decreases expenditures by about 10 percent, and includes scenarios that would scale back subway and bus service.
Posted by Queens Crapper at 12:48 AM

What's the point in giving me my measly $400 rebate when you've just raised my annual real estate taxes far beyond that amount?

Glad to see our monarch/mayor gone soon as will millions of other NYC residents no doubt!

Way to get reelected, Bloomturd!

Too bad you don't like being short termed shorty!

But then again, the weekend service is pretty much the same as the weekday service.

What crap. Mayor Mike needs to call in the all the tax abatements he blythly hands out to developers and corporate buddies before raising taxes on struggling wage-earners. Let the Yankees fill the budget gap!

Raise the fare, please. I'll pay 3 bucks at this point. Just GIVE US D@*N service for our money!

It is amazing to me that this man is a billionaire. His solution to every problem is raise taxes. Genius, wow it must have taken all of 30 seconds to come up with this plan. I saw him on Sunday morning show pretending he was a spectator to the whole mortgage problem. What did he think was going to happen when he allowed 150,000 permits for new construction in Jamaica? Did he think just because he was the Mayor all those poor people are suddenly lifted out of poverty and can now afford new homes costing $500,000? He and his entire developer friends are right in the thick of this crisis. They bundled all those bad mortgages and sold them to Fannie and Freddie, now we pay. Disgraceful, all he has done is picked the pockets of the working class. Anyone is better than he is. ANYONE!

When is his term up? It can't come soon enough.

OK guys, this is our chance to go after the subsidies the public gives to developers.

Taxpayers Get Value for their Money!

Insist that taxes go for the services of those that pay for it, rather than subsidize developers!

If you are not reading this, hopefully someone on your staff is.
STOP USE MY TAX DOLLARS TO TRANSLATE EVERYTHING AND ANYTHING INTO EVERY LANGUAGE ON EARTH.

I believe we should speak English in this country and this city.

So there! You can save money already!

you said it sister!

Great comments, all. We need a voice to save the 'Other boroughs' (ie the peeps that do most of the livin and dyin in the City of NY without six figure bonuses).