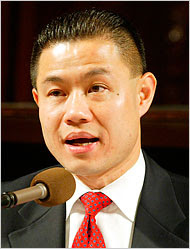 For the last year, City Councilman John C. Liu has made it clear that he wanted to run for citywide office at the end of his current term next year. But Mr. Liu, a Democrat from Queens, was consistently vague about whether he would run for comptroller or public advocate.

But in an interview this morning, Mr. Liu indicated that he was leaning toward undertaking a campaign to succeed William C. Thompson Jr., the city’s comptroller.

“I wouldn’t rule anything out, in terms of positions,” Mr. Liu said. “But I have a strong natural management background. And this is a very difficult time that the city is going through now. And to be honest, being able to contribute through the comptroller’s office is attractive to me.”

Queens Councilman Leaning Toward Comptroller Run
Posted by Queens Crapper at 12:23 AM

Oh yes boys and girls, the son of a bank robber want to be in charge of the city's finances.

He stole from the Great Eastern Bank (Tommy Huang's father in law's bank) and was convicted by the feds!

Now #1 son Johnny is running for comptroller to watch over NYC's bankroll.

And will the fox
guard the hen house ?

Did any of his campaign $$$$$ come from the Great Eastern Bank job or did the Stavisky's share some of their loot with C.M. Liu?

Maybe Comptroller Liu
can help launder a portion of all that Chinese/Taiwanese money which has been flowing into various political campaign coffers
for over 20 years now!

Tsk, tsk, tsk....
are you suggesting a Chinese laundry
out of the NYC comptroller's office?

Liu's "volunteers" are going to be
very busy posting soon calling you a "racist" after they've finished their morning coffee (or tea)!

This bum could not even hold on to an Assembly seat in his own district and he thinks he can win a citywide office. Another payday for Parkside, Another lose for Parkside - along with Crowley and Connors this year. Goodby young

And, he is alleged (yet to be proved) to the notorious Tommy Huang's wife.

Why hasn't anyone asked Liu in a public forum if he is in fact related to Alice Huang?

Put him on the spot.

Challenged when it come to telling the truth, he denied being related to Tommy Huang when he was asked at a forum held at the Macedonia AME Church in 2001. In fact, Johnny boy scolded the civic leader for asking the question.

He is Alice Huang's cousin.

He's related to Tommy Huang VIA the Great Eastern Bank.

Some prominent members of Flushing's Chinese community have confirmed (privately but they refuse to go on record) that a family relationship DOES EXIST between Liu and the Huangs!

Absolutely, positively John C. Liu received campaign contributions from the employees of Daddy (the BANK ROBBER) while Daddy (THE BANK ROBBER) was under indictment for ROBBING THE BANK.

So Daddy (BANK ROBBER) is stealing from the low income residents of Queens as sonny boy uses money from bank employees of the very bank being robbed.

The following is a partial list of donors in 2001 to John Liu.

Certainly there were many other donations from bankers in 2001 but these are just a partial list of donors from Daddy's bank (THE BANK ROBBER'S).

Yea, this guy should be in charge of the peoples money, right!

I posed the donors list above and I failed to notice the column PREVIOUS DONATIONS.

So there is even more from some of those same donors and some of the previous donations were pretty large, but you all get the point.