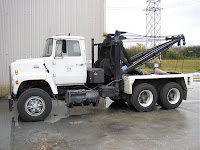 A tow truck driver is charged with snatching 22 automobiles off of Queens streets and selling them to a junkyard for cash.

Robert Lorenz, 48, of Dix Hills, would troll the streets of Queens looking for cars more than eight years old and worth less than $1,250 - a key detail that let him sell the cars to a scrap yard without having his name on the title, a little-known loophole in state law, prosecutors said.

Lorenz hooked up almost two dozen legally parked cars to his Cobra Scrap tow truck from March 22 to July 10 of this year, selling them to the Allocco Metal Recycling yard in Brooklyn, authorities said.

The cars were crushed and used for scrap metal, and Lorenz was paid $300 to $500 for each car. Lorenz is expected to be arraigned in Queens Criminal Court on charges of grand larceny, criminal possession of stolen property and falsifying business records. He faces up to seven years in prison if convicted.
Posted by Queens Crapper at 12:15 AM