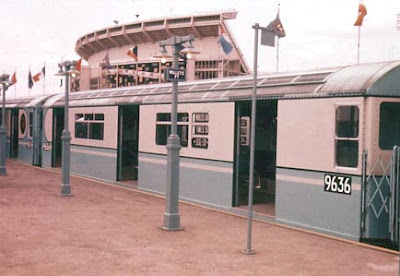 Fans, along with NYC Transit officials, will board the 7 train from the 42nd Street/Times Square Station shortly after 11 a.m. and arrive at Willets Point/Shea Stadium at around 12 noon. A fitting way to pay tribute to the long standing stadium and the train that serviced it for 44 years.

“What better way to soak in the nostalgia of the final game at Shea than to take a nostalgic ride on the original train that serviced Mets fans when the stadium first opened in 1964,” said Paul Fleuranges, VP of Corporate Communications for NYC Transit. “We’re proud to give the older generation of Met fans an opportunity to show the younger generation what it was really like to take the train to the game.”

Upon arrival at the stadium, Nostalgia Train riders will be treated to the sound of music, as musicians from The Metropolitan Transportation Authority’s Music Under New York program perform live. Mr. Met will also be on site to greet fans and pose for pictures. And, be on the lookout for free MetroCard® and Z-map giveaways, and stop by Transit’s MetroCard Van to purchase a MetroCard for the ride home.

For customized subway and bus directions to the stadium and other locations, use Trip Planner at www.tripplanner.mta.info.

Note: This event will be canceled in the event of a Mets rain out.

Photo from Carl's NY Mets Web Page
Posted by Queens Crapper at 12:55 AM

Hell yeah....The transit museame still has Worlds Fair Bluebirds thats how they came from the factory and were the best train cars IMHO ! They had the big bay observation windows like in that photo

Most the 7 line "Bluebirds" were re-painted as "Redbirds" to hide rust and iron track grime during the Koch admin.
Rode them all the time going to Avation HS in LIC

Trains are crowded and filthy night and day
so just spend half your salary and you're on your way...

Redux must be John Rocker !!
Welcome to Queens John.

Actually I remember the 64Fair, the #7, Corona in the 60's.
Those Bluebirds were new and clean. Most the people were Italian, spoke English and were proud of there homes and sidewalks.

The 7 train (and others)platforms were not all closed up with ugly corrigated tin at the time.
They were open like the Brooklyn Bridge with just awning's,
You could wait for the train and see for miles like Woodside.

Now you dont want to see anything, its to depressing with all the new cookie cutter building.

I'm counting the days until the namesake of Shea (the lawyer who was responsible for razing the original Pennsylvania Station) is finally stricken from public view !

Justice does exist
even if it comes 40 + years later!

Architect Stanford White and
Penn Station you are both avenged!

At one point those "bluebirds"
got painted a spanking WHITE before
they wound up getting brush slapped with red!

Those white cars were the biggest graffiti magnets ever!

Tell me NYCT (pre MTA)
knew what they were doing
when they made that dumb color choice!

Got any photos of these "white babies" Kevin Walsh or know the actual time frame on them?

The cars needed there first major rebuilding by 1982.
The White was sopposed to be "anti-graffiti" covering by 1982.

Apparently the contract went to General Electric in Buffalo and Amtrak in Beech Grove, Indiana.

The Coney Island yard has a full train of 1964WF cars in the colors they run for nastalgia tours and special events.
http://en.wikipedia.org/wiki/Image:Train_of_Many_Colors_4_8_08_at_40_Lowery.jpg

Volunteers save and rebuild&maintain these trains.
I think there is also 2 Bluebird Cars in the Corona yard you can see them from the LIRR railroad plaza

the mets is dead!