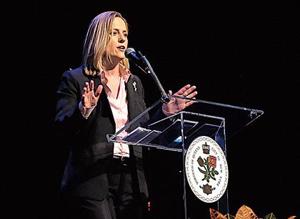 
Borough President Melinda Katz last Friday backed Mayor de Blasio’s plan to close the jails at Rikers — but came up short of endorsing the construction of a new 30-story lockup on Queens Boulevard to replace it.

Katz, who announced last month that she is running for Queens district attorney, chose what may be her final State of the Borough address to call for an end to the current jail system.

“Let me be clear,” she said for emphasis. “I have been, and I remain, a strong supporter of closing Rikers Island.


“It is a moral imperative that we overhaul our city’s jail system ... And closing Rikers is an integral part of that.


However, the borough president said, she was “deeply disturbed” that people in Kew Gardens, where a new jail is slated to be built, have not had “meaningful community engagement and input.”


She called for the city to “start anew” and come up with a better plan.“There’s still plenty of time to do it the right way,” she said.

This is the Kew Gardens town hall meeting concerning the jail QB President Katz obligatorily acknowledged in her speech which she did not engage to attend.

Move it, but where...nobody cares as long as it somebody else's problem. There is no sense of unity among the various hoods n' nabes, and sadly therefore this will fail to be stopped.

Too focused on other things like a new soccer stadium to think critically and thoroughly on other issues. This woman wants to be the mayor of this city so desperately but does not realize that you have to put in the hard work and have strong ideas and solutions to the citys many problems.

I watched that meeting. Two separate bald guys got the mic pulled from them when they started talking sense. Basically telling people at the meeting to stop voting the same losers in over and over.

Then they let a couple of women drone on about prison rape and social services for inmates. Pfffft.

I guess the people running the meeting didn't want to upset any politicians. Lame

KK couldn't bother to show up, and sent some stooge.

House them down to Jamaica where nobody gives a shit. It be an improvement.
Give them jobs cleaning up that dump and keeping the slobs in check.

Yo have the old house of detention right behind Supreme Court on Queens Boulevard. Seems it would only need updating,would Save money. Or would the city use the money they get from developing Rikers Island into housing for the wealthy to build new jails?

I heard they wanted to attach it to kew gardens court house somehow. Doesn't seem like a good idea to me at all.

Just let them all go!

Walls and fences are immoral!!!!

Start locking up tax payers to fill the $2.3 billion gap and to pay for de Blasio’s new $92.2 billion budget.